Easter, Passover, and the West Side Story that Wasn't

Late in 1948, in the early stages of his collaboration with Jerome Robbins on the musical that would become West Side Story, Leonard Bernstein wrote in his diary:

Jerry R. called today with a noble idea: a modern version of  Romeo and Juliet set in slums at the coincidence of Easter-Passover celebrations. Feelings run high between Jews and Catholics. Former: Capulets, latter: Montagues. Juliet is Jewish. Friar Lawrence is the neighborhood druggist. Street brawls, double death—it all fits.

It is likely that Robbins (né Rabinowitz), who was both a dancer and a choreographer, had been partially inspired by Sergei Prokofiev's ballet Romeo and Juliet, which had been written in 1935 but was first performed in its full version only three years later. Bernstein, however, who had just returned to New York from his second visit to the nascent state of Israel, had additional reasons to be interested in the project.

The two men, both of whom had been born in 1918 to families of Russian Jewish immigrants, had first collaborated artistically on the  ballet Fancy Free (1944), which quickly morphed into the Broadway musical On the Town. But the project they began to discuss in 1948—shortly after Bernstein had famously conducted the Israel Philharmonic in an outdoor concert of Mozart, Beethoven, and Gershwin, performed before Israeli soldiers in the sands of Be'er Sheva—was to be the first in which their shared ethnicity would find expression. 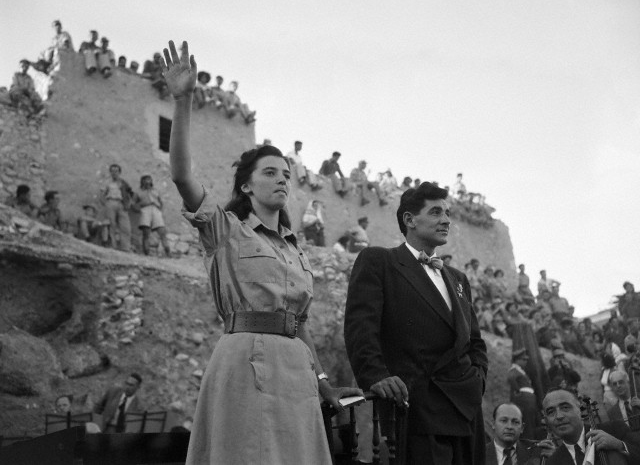 Leonard Bernstein (standing), at a concert given with members of the Israel Philharmonic for the armed forces, Be'er Sheva, November 20, 1948.

Or would it? By the time the play opened in 1957—with the collaboration of the lyricist Stephen Sondheim and the librettist Arthur Laurents (both also Jewish)—it had been rid of all associations with Jewish-Christian  tensions in Catholic Europe, except for the survival of Tony (Anton) as a "Polack." The Jews themselves were disguised, in the words of the cultural historian Stephen Whitfield, as Puerto Ricans: "The Sharks are swarthy newcomers, strangers who speak accented English."

To this I would add that the swarthy Sharks were on some level an amalgam of both New York Puerto Ricans and Middle Eastern Israelis, whose spirited willingness to fight to the death Bernstein had admired in a 1947 letter to his mentor, the conductor Serge Koussevitzky: "There is strength and devotion in these people that is formidable," Bernstein wrote. "They will never let the land be taken from them. They will die first."

The willingness  of Jews to die for their ideals had been on display for centuries.  During the Middle Ages, it was expressed primarily through their readiness (and on occasion their zeal) to perish as martyrs rather than accept forceful conversion to Christianity, which they disdainfully regarded as a form of idolatry. The coincidence of Easter-Passover celebrations was often a time when, as Bernstein and Robbins later recognized, feelings would run especially "high between Jews and Catholics."

Already in the 6th century, ecclesiastical councils in Merovingian France had forbidden Jews to mix with Christians during the period from Holy Thursday through Easter. A half-millennium later, in early 11th-century Rome,  a number of Jews were beheaded after a coreligionist informed papal authorities between Good Friday and Easter Sunday  that a crucifix had been mocked in a local synagogue. Although, in 1946, the Anglo-Jewish scholar Cecil Roth would dismiss the charge itself as "improbable," I'm not sure that his younger coreligionists in mad Manhattan—soon to set the Jets against the Sharks—would have agreed.

In 1066, Archbishop Eberhard of Trier (in western Germany, on the Moselle River) threatened the town's Jews with expulsion if they refused to convert by the Saturday before Easter. Ironically (or providentially), he seems to have died on that very day.  According to a Latin chronicle of the town's history, the Jews had caused his death by burning a wax figure of the bishop that they had first arranged (through bribery) to have baptized. This story is considerably less probable than the previous one, if only because of the efficacy attributed to the Jews' black magic.

Three decades later, however, during the First Crusade, we have more reliable evidence that two Jews of Trier town did engage in the sort of behavior toward the crucifix that had been attributed to the Jews of Rome. According to the Hebrew chronicle composed by Rabbi Solomon ben Samson, the pair had indicated their willingness to convert and were standing before the palace of the bishop (Eberhard's successor). Presented with a crucifix to which they were expected  to bow, they instead "cast a branch before the abomination" and were promptly slain "in sanctification of God's divine name."

A recent American translator of this chronicle has rendered the key phrase vaguely and rather euphemistically as "they mocked the image." But as I have argued elsewhere, on the basis of the allusion to Ezekiel 8:17, the likelier and more brazen affront was that they either urinated on the image or exposed themselves in its presence. Such rude expressions of disdain are hardly unknown in history. One cannot help wondering what sort of ballet scene Bernstein and Robbins might have created around the defiant actions of their coreligionists in medieval Trier.

Unlike the case of these two Jewish men who died rather than submit to baptism, there were also cases of conversion to Christianity, not always performed under duress, some of which provoked similarly dramatic responses. In 576, the Easter procession at Clermont-Ferrand in central France featured a former Jew, robed in white, who had been baptized earlier that day. His new outfit was ruined, however, by a local Jew who threw rancid oil on his head as he passed below, the oil apparently chosen to mock the neophyte's prior anointing. (The deed was attributed to the devil's influence by the Latin chronicler Gregory of Tours, from whom we know of the incident.)

Like the Jews in 11th-century Rome, those of 6th-century Clermont-Ferrand promptly paid collectively for the  reckless behavior ascribed to their fellow Jew. Forty days after the oil-throwing incident, as we learn from Gregory, the synagogue of Clermont was destroyed by enraged local Christians after the Ascension Day procession. Though Gregory merely implies a (strong) connection between the two events, the historian  Walter Goffart has persuasively argued that "the leveling of the synagogue, too thorough for casual aggression, was the premeditated Christian reply to the Easter insult."

Indeed, the events of 576 might  well have provided Bernstein and Robbins with the basis for just the sort of theatrical piece they originally had in mind—and may one day yet serve a similarly talented (and historically aware) team of collaborators.

Elliott Horowitz is co-editor of the Jewish Quarterly Review and author of Reckless Rites: Purim and the Legacy of Jewish Violence (Princeton University Press, 2006).

Bernard Yablin on April 27, 2011 at 9:31 am (Reply)
A most remrkable story(but I couldnt print it out for friends)
Anita Silvert on April 27, 2011 at 9:38 am (Reply)
Interesting reference to Broadway for a serious part of our history. I would suggest, in keeping with the Broadway part of the article, that the other reason that Bernstein and Sondheim changed the show from Jews and Christians to Puerto Ricans and Polish was a simple American Jewish community reality - the Jewish community would (and did) move out of the neighborhood, and wouldn't have stayed to fight it out.
Perez Felix on April 28, 2011 at 12:11 pm (Reply)
In my book "Origines Juives des fetes chretiennes", I show that Pessa’h and Easter occur on the same dates for an average of only 1 year every century :
for our century 1954 (18 april) & 1981 (19 april.

For this coincidence to occur
- Pessa’h must be a Sunday (only 10% of the cases rather than the expected 25%)+
- Jewish and christian calendars must give the same date of new moon (also 10% of the cases).

skeptic on May 1, 2011 at 2:32 pm (Reply)
This is just another instance of American Jewish writers,etc. obscuring their origins by setting their creations in worlds about which they know nothing: think IMITATION OF LIFE, SHOWBOAT, PORGY & BESS, DEATH OF A SALESMAN.