Wednesday, May 8, 2013 by Judah Bellin | Jewish Ideas Daily » Daily Features
In his new book, Rod Dreher insists that communities are difficult to forge in America’s largest cities.  But for traditional Jews, the demands of modern capitalism and community are not as incommensurate as Dreher assumes.

Friday, April 5, 2013 by Hal M. Lewis | Jewish Ideas Daily » Daily Features
Distinguished scholars profile the new generation of American Jewish leaders, from the ages of 22 to 40, and ask how they differ from the leaders of the generation past.  But who counts as a Jewish leader?

Thursday, April 4, 2013 by Diane Cole | Jewish Ideas Daily » Daily Features
One of the tragedies of the American Civil War was that it pitted friends and family members against one another.  American Jews were not immune from the internecine bitterness.  A new exhibition tells their story.

AIPAC and the Secret Worlds of Peoplehood

Tuesday, March 12, 2013 by Alex Joffe | Jewish Ideas Daily » Daily Features
No cause, force or organization, brings Americans, primarily Jews but also Christians, together like the cause of Israel as managed by AIPAC. 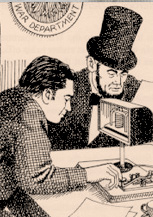 Monday, November 19, 2012 by Jonathan Neumann | Jewish Ideas Daily » Daily Features
Since the rise of the Religious Right, many people have associated American religion with political and cultural conservatism. Historically, however, American religion has been at least as liberal as conservative.

Friday, September 21, 2012 by Charles Krauthammer | Jewish Ideas Daily » Daily Features
Milan Kundera once defined a small nation as "one whose very existence may be put in question at any moment; a small nation can disappear, and it knows it."  Israel is a small country. This is not to say that extinction is its fate. Only that it can be.

Are Day School Vouchers the Answer?

Jewish Studies, Once and Future

Thursday, August 23, 2012 by Adina M. Yoffie | Jewish Ideas Daily » Daily Features
It’s that time of year again—not just the High Holidays but the time when Jewish college students pore over online course catalogues and make their choices for the fall semester. Will they take Jewish Studies courses? If so, does it matter which ones?

The Birth of Conservative Judaism

Tuesday, July 10, 2012 by Lawrence Grossman | Jewish Ideas Daily » Daily Features
My little corner of Queens, New York, where the six Conservative synagogues that existed two decades ago have dwindled to two, epitomizes the national movement.
Page 1 of 712345...»Last »
Editors' Picks
Kissinger the Jew Gil Troy, Tablet. “The outsider even as an insider, he endured the president’s anti-Semitic rants—and then endured the same contemptuous cries of ‘Jew-boy’ from harsh critics in Israel.”
Beef with the Butcher Nic Cavell, Dissent. In 1902, working-class Jewish women in New York rioted to enforce a boycott against price-gouging kosher butchers. A new "street musical" dramatizes their battle.
Go West, Young Man Jeremy Gillick, Moment. Joining the Californian gold rush in the 1850s, Jews discovered a land with no established hierarchy, no significant anti-Semitism—and no rabbis.
Smiling on Yom Hashoah Chaim Steinmetz, Times of Israel. On Holocaust survivors at a Montreal memorial service: “Here they are, 68 years later, with their grandchildren. They have rebuilt their families and made profound contributions to our community.”
The Schindlers of the Philippines Dan Pines, jweekly.com. The Frieder brothers, Cincinnati Jews, made cigars in Manila and played poker with Dwight D. Eisenhower—and that was how 1,200 Austrian Jews were rescued from Hitler’s Europe.
Everything New Is Old Again Jason Guriel, Parnassus Review. More than 30 years ago, Charles Bernstein and the Language poets tried to startle readers by freeing words from the illusion of meaning.  Today’s readers may be less surprised.
Memorializing the Rav David Shatz, YU News. On the occasion of Rabbi Joseph Soloveitchik's 20th yahrzeit, some thoughts on how his thought will be conveyed to a generation that did not know him.
Learning with Harold Bloom Maria Popova, Brain Pickings. Critic Harold Bloom used the structure of the Kabbalah for his book analyzing 100 geniuses.  Now an Italian team of artists and graphic designers is translating the book into pictures.
“Ihr zint frei!” Margalit Fox, New York Times. In 1945 Rabbi Herschel Schacter, who has died at age 95, entered Buchenwald with Patton’s Third Army.  “Shalom Aleichem, Jews,” he shouted to the inmates in Yiddish, “you are free!”
Why Is Manischewitz Matzah Like the iPhone? Daniel Fromson, New Yorker. OK, the founder of the Manischewitz matzah-making company wasn’t exactly Steve Jobs.  But, like Jobs, he took an existing product, tweaked and improved it, and vastly improved its image.