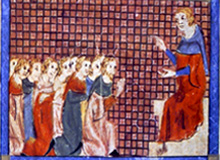 How to make sense of Joseph?

This week we learn of his nearly pathological efforts to ensnare, baffle, accuse, imprison, and shame his brothers—the same brothers who, decades earlier, sold him into slavery. Now he is Grand Vizier of Egypt, and he gets a chance to show them who's boss.

A famine has struck the region. Jacob hears there is grain to be bought in Egypt, and sends ten of his remaining eleven sons down. Three full chapters carry us from their initial appearance before Joseph asking for grain, until the story's surprising dénouement. In between, Joseph is portrayed as conniving, self-centered, and cruel—but also confused and curiously human.

Upon seeing his brothers, Joseph hatches a plan. He disguises himself and pretends not to recognize them, and accuses them of being spies. He will sell them grain, but to prove their good intentions, they will have to leave one of them, Simeon, behind as a prisoner, while they return to their home and bring back Benjamin, the one who stayed behind with Jacob. On the way, the brothers mysteriously find that the money they paid for the grain has reappeared in their sacks. Then, after they arrive home and the grain has again run out, famine forces Jacob to give in, and he allows Benjamin to head to Egypt with the brothers. This time, Joseph releases Simeon and gives them all a feast, "miraculously" seating them in order of age.

When they set off again, they are stopped by Joseph's guard, who has secretly planted his boss' goblet in Benjamin's sack. Joseph, having framed Benjamin, imprisons him and claims he won't release him at all, while the others are free to go. Finally, Judah makes a plea that such a tragic turn will destroy their father, and Joseph loses his composure, bursts into tears, and reveals himself.

To understand this story, we need to first note that all along, Joseph is driven by two conflicting, powerful forces: the insistence that his dreams have divine meaning, and his passionate commitment to his family. In the end, and after months of misery, the latter wins out over the former—and this sends a powerful message to the world.

First: Are dreams a form of revelation? Joseph clearly believes they are. It is on this premise that his entire meteoric rise from prison to power in Egypt, depicted this week as well, rests. When Pharaoh's imprisoned ex-aides need their dreams interpreted, Joseph asks rhetorically, "Do not interpretations belong to God?" (40:8)—and then he interprets them himself. Later, when interpreting Pharaoh's own dreams, he says more than once, "God has declared to Pharaoh what he is about to do" (41:25). The point here is not that Joseph is arrogant. He succeeds in Egypt precisely because his interpretations prove accurate; they really do seem to be a vehicle for prophecy.

And so, when his brothers, who want to ward off the famine that Joseph accurately saw in Pharaoh's dreams, appear before him, Joseph undertakes to make sure his own childhood dreams come true. "And Joseph remembered the dreams he had dreamed about them." (42:9) Those dreams, we'll recall, had his brothers and parents symbolically prostrating themselves to him. Joseph embarks on a complex scheme to make them reality. For if Pharaoh's dreams are prophecy, and so are those of his servants, then shouldn't the same hold true for his own?

Throughout all this, however, there's another, contradictory force at play, an overwhelming emotion roiling beneath the surface and confounding his plans. Time after time, Joseph has to step aside and control his tears. Time and again he asks after his father's well-being. Something is bubbling up—something that wants to stop the charade and call out, as Joseph finally does, "I am Joseph—is my father alive? . . . I am Joseph your brother."

In Joseph's inner conflict, it turns out, lies the inner particle accelerator, the nuclear reactor core, of religion. On the one hand, you have the imposition of truth from above, the divine revelation, the theory of what should and can be that is born of abstract or metaphysical ideas. These are symbolized by Joseph's commitment to the dreams. On the other, you have the truth that seems inherent in our world, that is transmitted by tradition, that includes blood loyalties and commitment to family. These are symbolized by Joseph's constant need to cry when talking to his own kin.

The entire history of religion can be boiled down to this secret, inner tension (or even contradiction) between revelation and tradition. We see it in modern Judaism, when, for example, many Reform Jews abandon their own belief in radical non-observance in favor of a more accepting and flexible approach to classical Jewish practice. And we see it as well in the many ultra-Orthodox Jews who adopt ever more clever new stringencies that have no basis in tradition whatsoever.

Sometimes reason poses as tradition; sometimes the reverse. The question of which of these carries God's message, or what is the most divine combination of the two, is never addressed head-on, for to ask it is to admit the single fact that threatens all organized religion to its very core—namely, that we might actually have no reliable sense of what God wants of us at all.

In our story, Joseph ultimately sacrifices his beliefs, his theories, and his revelation to a truth much more compelling: the love for his father and brothers. And while in many cases revelation trumps tradition and family loyalty, here the Bible—that paragon of top-down, revelatory texts—seems to go the other way entirely.