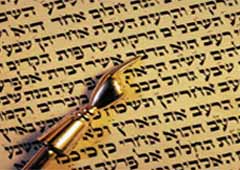 This week, the life stories of three great biblical figures all come to a head.

First we have Judah, who once again proves why he deserves to be the patriarch of Israel's greatest kings.

Joseph, now the vizier of Egypt and unrecognized by his brothers, tries to trick them into bringing their father Jacob down to Egypt so that he can fulfill his childhood dream of having them all bow down to him. He has already held their brother Simeon in prison while the others go back to Canaan and, with Judah taking the lead, persuade the anguished Jacob to let them return with their youngest brother, Benjamin.  Now, on a pretext, Joseph has seized Benjamin in turn, demanding they produce Jacob as well. But Judah courageously steps forward to confront the vizier of Egypt and tell him what's what. "We have a father, an old man, and a child [Benjamin] of his old age," he says—adding for good measure that another brother (that is, Joseph himself) "is dead, and [Benjamin] alone is left of his mother, and his father loves him. . . . When he sees that the lad is not with us, he will die."

Judah, the man of truth: this heartfelt petition is enough to shatter Joseph's veneer. Failing to fight back tears, he reveals himself to his brothers, and sends them back to Jacob armed with the knowledge of his survival as well as the gifts to prove it. After recovering from the shock, Jacob appoints Judah to lead the family's expedition back to Egypt: "And he sent Judah before him to Joseph, to show him the way before him to Goshen." This is Judah's last appearance in the Bible, and it is as a leader, literally showing Israel the way to salvation.

Second, we have Joseph himself. In Egypt he has risen to greatness on the strength of his cleverness and his ability to decipher dreams—first those of Pharaoh's chief baker and cupbearer, who were his cellmates in prison, and then those of Pharaoh himself. But his own youthful dreams, the dreams that told him he could force the entire cosmos to array itself before him in submission, had never resonated with his brothers and had indeed caused them to sell him into slavery. Now his efforts to impose his dreams upon them fail again—yet, dramatically and quite magnificently, he rises to the occasion. Egypt, we learn from his metamorphosis, is a land of lies and an incubator of fantasy; to come to terms with his own past, Joseph must rediscover the world of truth.

And finally we have the elderly Jacob, who finds new wellsprings of life in recovering the son who he thought was long dead. While Joseph's biography follows an upward spiral, from the depths of a pit in the desert to ruling all of Egypt, Jacob's is more like a landscape, revealing the hills and dales of a permanent struggle with God and man. His days, he tells Pharaoh, have been "few and evil," marked by tragedy but also by the stubborn will to live. He has survived the threats to his future from his brother Esau and his uncle Laban, and the early death of his beloved wife Rachel. Above all, he has survived his own grief over the loss of Joseph, finally meriting to see his family reunited and God's promise fulfilled.

All of these stories are meant, in part, to set the stage for the Israelites' imminent descent into slavery in Egypt, providing a glimpse into the kind of family legends they must have carried with them through their ensuing ordeal and, centuries later, their grappling with the arrival of the supreme leader Moses. From these stories we learn of both the importance and the limitations of leadership, illustrated by the stirring subordination of the political, the fleeting, and the fantastic to the human, the eternal, and the true. At the same time, we are given a remarkable look at three very different individuals, each of whom learns to rely on his strengths to help him overcome his weaknesses: Judah's courage in speaking truth at moments of highest risk; Joseph's cleverness, which enables him to thrive and succeed, to rescue Egypt from starvation, and above all to save his family; Jacob's refusal to despair even in the face of the most awful personal hardship.