Enmity; or, Yiddish in America

He was irascible, neurotic, self-obsessed, and socially inept; a brilliant misfit and misanthropic dilettante, forlornly absorbed in jazz and avant-garde short stories. Upon his death in July 2010, Harvey Pekar's few close friends insisted that the underground comic-book writer was also a gem in the rough, an out-of-date socialist naïf, a sweet, sincere everyman.

Pekar's devout fans had every reason to believe they knew everything there was to know about their blue-collar bard.  Pekar obsessively chronicled his life in the comic book series American Splendor (later brilliantly adapted into the film of the same name), in which his claustrophobic Cleveland universe was symbolized by the windowless basement office of the VA hospital where he toiled for three decades as a file clerk.

Now, however, more than a year since his passing, there appears a posthumous—and by no means minor—revelation.  Pekar secretly harbored an obsession with, of all things, Yiddishkeit—the title and subject of his final work, co-edited by Paul Buhle in collaboration with 24 cartoonists and writers.  The result is a stunningly colorful but dizzyingly messy comic bouquet to secular Yiddish culture.

What is genuinely astounding about this new book is the uncommon, if superficial, erudition it displays in Yiddish letters. Who knew that Pekar, cloistered in that hospital file-room, was using every spare moment to devour volumes of Yiddish literature (albeit in English translation)?  His reading bespeaks the undisciplined enthusiasm of the autodidact, ranging from Joseph Perl's 19th-century anti-Hasidic satire, Megaleh Temirin, to the late-20th-century novels and short stories of Isaac Bashevis Singer, whom Pekar skewers with a ferocity bordering on pathological hatred. Jacob Glatstein and Chaim Grade receive gentler treatment as writers whose work Pekar claims to love (but doesn't quite understand).  But Pekar's personal identification is strongest with the socialist, anarchist, and Communist strains of late-19th- and early-20th-century Yiddish literature, from the "sweatshop poets" in New York to Stalin's Yiddish stooges.

Pekar often depicts himself puzzling out loud over the reasons for anti-Semitism: how could the pogromchiks, then the Nazis, and finally the Soviets really believe the Jews posed any threat? The poor, powerless Jews whom he adores, in their mythic "Yiddishland": why were they not accepted, Pekar wonders, scratching his head. And here lies the key difference between his secular Yiddishist heroes and their contemporaries, the Zionists. The latter group broke decisively with the mentality of impotent bafflement at Jewish oppression. Rather than trying to understand how the disease of anti-Semitism had metastasized in the European mind, they turned their back on Europe in favor of Jewish national self-determination, the sole successful antidote to anti-Semitism in Jewish history. 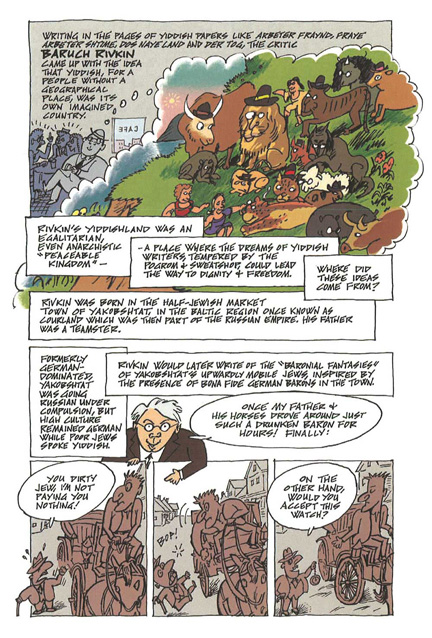 Thus, an especially telling absence in Yiddishkeit is so much as a single reference to the fact that more than half of the figures it profiles began as Hebrew writers (although Pekar does allude to the "slow start" of  the great Hebrew journalist and Yiddish author Jacob Dinezon—by which I gather he means Dinezon's scores of Hebrew essays). Even more egregious is the failure to include the great Yiddish and Hebrew author Hayim Nahman Bialik, the poet of Zionist rebirth but also the literary hero of the Yiddishist Labor Zionist movement.  And little wonder that Pekar ignores Jacob Glatstein's most famous and powerful poem, "Good Night World," which so angrily mirrors the forceful Zionist response to Jewish suffering (if without embracing Zionism's solution).

Given his self-defeating personality and radical convictions, it is not terribly surprising that Zionism proved so irksome to Pekar, and downright evil to a number of his "secular-universalist" collaborators. In one particularly sickening panel in Yiddishkeit on the history of false messianism, an Israeli tank emblazoned with a cross looms over a hilltop, while soldiers wearing stars of David and wielding long knives attack the indigenous Arabs. That such imagery appears in a comic book entitled "Yiddishkeit" (that is, "Jewishness") only underscores its perversity. 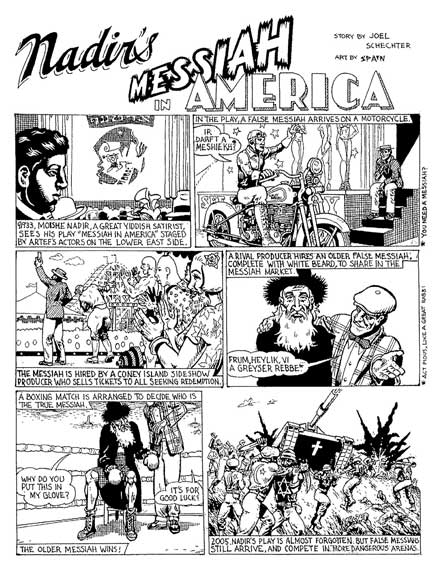 Pekar was a proud Jew who bristled at the injustices done to his people. But he remained a clueless proud Jew, averse to happy resolutions not only in his own life but in the history of his people. And while Pekar possessed a finely-tuned ear for the aesthetics of Yiddish literature, his was the acute hearing of a blind man. His presentation of the most famous works of I.L. Peretz and Chaim Grade makes this all too clear. Pekar appreciated their prose, but only on aesthetic grounds, with little insight into the tragic historical circumstances or the religious and nationalist angst that inspired and animated it.  His assessments of their work reveal a gaping ignorance of both the enduring power of religious Yiddishkeit, so powerfully portrayed by Grade (here absurdly depicted as a "rationalist" who had "freed himself of [the rabbis'] influence") as well as a deliberate disregard of the strong influences of both traditional Judaism and Jewish nationalism in the works of Peretz and his circle.

An example is Pekar's one-panel treatment of Peretz's two most famous short stories, "If Not Higher" and "Bontshe the Silent." He finds the former irritatingly nostalgic for the world of traditional Judaism and the latter "overwhelmed by schmaltz."  This is a wildly off-the-mark reading of Bontshe, who, arriving in heaven after a life of horrid abuse, is granted any wish—and asks for nothing more than a daily buttered roll.  Pekar vaguely detects some irony, but misses Peretz's harsh satire of Jewish submissiveness as encapsulated in the pathetic figure of Bontshe.

As for Grade, Pekar is clueless about The Yeshiva, giving an absurd reading of this great pre-Holocaust opus of religious instruction and religious doubt as a parable for the universal human struggle between optimism and pessimism. Pekar's dissatisfaction with the ending of Grade's classic story, "My Quarrel with Hersh Rasseyner," reveals more about himself than it does about its great author: "at the end," he writes, "Grade expresses his desire to remain friends with Rasseyner, something I kind of wish he had left out of the story." Compromise and phony reconciliations were, for Pekar, signs of weakness, while misery, anger, feuding, and endless bitterness comprised his version of the examined life.  Unfortunately, this is precisely what he finds so darkly attractive about the now defunct and defeated secular left Yiddish political culture. 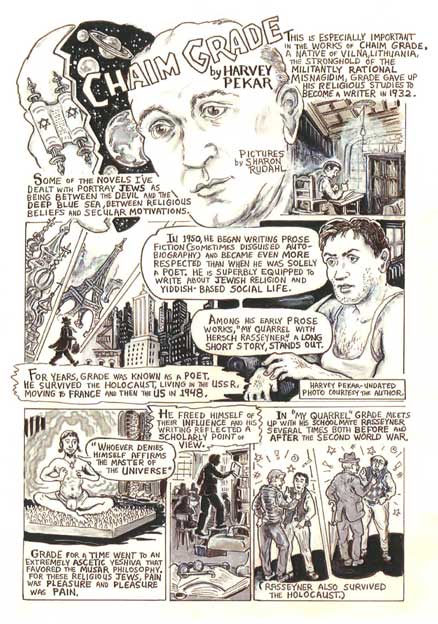 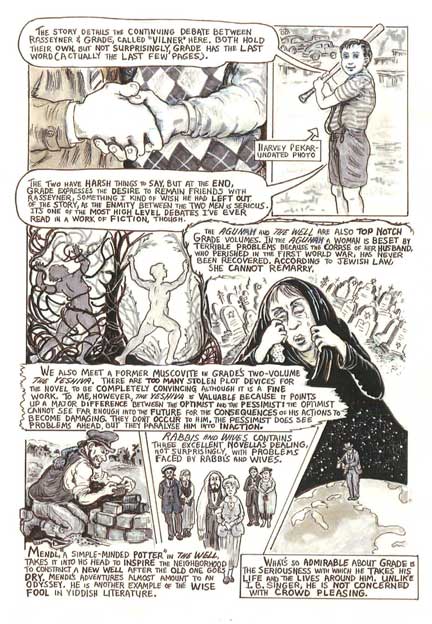 All of this is doubly ironic since Pekar was raised in the proudly nationalist Yiddish Labor Zionist tradition. But Pekar was not exactly sentimental about his youth.  Just two months before his death, he told the Toronto Star that "the Jewish thing is, like it or not, a huge subject for me":

And I've had to go through a kind of change in my view of Israel because, when I was a kid, my parents were ardent Zionists . . .  and, at one point when I was a school kid, I was a Zionist too. . . . My mother was an ardent Zionist and she was also pro-Communist. And I remember she used to defend the Soviet Union. . . . But when push comes to shove and Israel and Egypt had a conflict in 1956 and the USSR went with Egypt, she never talked about the [Soviets] any more. Nationalism once again triumphs over ideology. Nationalism is something I really cannot stand.

Given the choice between supporting Israel and supporting the Soviet Union, Pekar would have "gone with ideology" regardless of the horrors committed in its name.

In the last year of his life, Pekar produced two comics for the Jewish Review of Books. In one, after mistakenly greeting his neighbors on the Sabbath with an incorrect formula suitable only for a holiday, his stand-in character muses, "OY, Somehow I made an ignoramus of myself." Alas, Yiddishkeit confirms this. 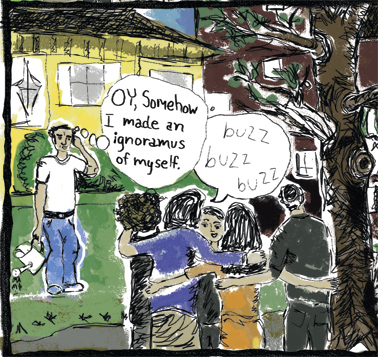 Courtesy of Tara Seibel and the Jewish Review of Books.

Allan Nadler is a professor of religious studies and the director of the program in Jewish studies at Drew University. He is currently serving as the Norman and Gerry Sue Arnold Distinguished Visiting Chair in Jewish Studies at the College of Charleston.

Alan Astro on September 12, 2011 at 1:59 am (Reply)
yasher-koyekh!
david wilson on May 1, 2013 at 12:06 pm (Reply)
Wow!!! You don't hid your biases at all. It seems to me that if a Jewish subject does not embrace Zionism it is somehow deficient and relegated with scorn as being misguided.

Absent from your critique is any mention of the long standing tug-of-war between Yiddish and Hebrew in prewar Europe up till today(represented by people like Harvey Pekar). You can extend that to the current subject--secular Yiddish culture vs. the ideology and actual implementation of Zionism in Israel. Hebrew, as a Jewish language trumps Yiddish and Zionism trumps Yiddishkeit. That's your position, isn't it? Your literary criticism follows from that and does a disservice to people like Pekar. You think you won so feel justified in rewriting history.