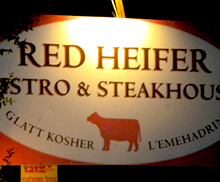 The red heifer, which we read about in this week’s portion, serves to purify those rendered impure by contact with a dead body. This process is traditionally known as the hok par excellence, the archetype of an inexplicable statute in the Torah.  Even wise King Solomon, the Talmud relates, could not fathom it, while some rabbinic sources insistently remind that the law is binding, irrespective of the ridicule that its apparent absurdity will provoke.

Wherein lies the absurdity? There are at least a couple of possible features: one is that the heifer purifies the one who has become impure from contact with a corpse, but at the same time defiles the priest administering the ritual; another is that the process resembles that of a Temple sacrifice, yet is not carried out in the Temple, and therefore might be seen as an improper usurpation of Temple ritual.

I would like to address a different facet of this ritual: its symbolism. After all, the process—the selection of the heifer, the incineration of the heifer, the addition of cedar wood and hyssop to the fire, the admixture of the ashes with water, and the use of that water as a purifier—comprises several odd practices. What is the significance of it all?

One explanation (expanded upon in Rashi based on Moshe ha-Darshan) is that the ritual of the red heifer serves as atonement for the golden calf. Consider the following criteria:

Poetic though that interpretation may be, I’d like to suggest another.

We begin with the redness of the heifer—it is not just red, but wholly red. This is a high standard—red heifers aren’t particularly common! Indeed, the Talmud suggests there had only ever been nine of them. Moreover, the heifer must be temimah, ‘‘perfect’’: even two discolored hairs disqualify the beast. The heifer must be without blemish, which we might read as reminiscent of a sacrifice, or simply as an additional sign of perfection. Finally, the heifer also must never have borne a yoke, never have worked, again underscoring it as some sort of perfect specimen—an embodiment of perfection, even.

And what is done with this representation of perfection? It is taken and slaughtered for no apparent reason—there is, for example, no explicit atonement associated with the slaughter—as part of a process the absurdity of which we have already noted. In fact, not only is it killed, but its very physical integrity is obliterated as, in all its perfect, cardinal glory, it is reduced to mere ashes. This cannot be without symbolic significance!

But how should we understand perfection? We get one answer from the thought of Rabbi Joseph Soloveitchik. In his essay, “Catharsis,” Soloveitchik interprets the injunction to Adam, ‘‘fill the earth and subdue it’’ (Genesis 1:28) as enjoining man to ‘‘defy opposition on the part of nature and to march to victory. Biblical man is out to subdue his environment.’’ This, he argues, is a justification for the pursuit of scientific, technological, aesthetic, and intellectual excellence. We are to master the world as it was granted to us by God, a theme Soloveitchik also develops elsewhere in his writings.

But he also insists that this pursuit of excellence, or material and intellectual perfection, must be tempered in certain ways; for relative to God, man is a limited being, and he must acknowledge this:

When conquest is within man’s reach and the road to realization has been cleared of all hindrances, man-victor, who needs only to reach out and grab everything his heart has anxiously desired, must change his course and begin to withdraw.  When victory is near, man must invite defeat and surrender the spoils that he had quested for so long.

Soloveitchik describes this movement as dialectical; a push to imitate God’s perfection is reversed by a deferential step backwards. And indeed this is not unnatural to those attuned to the Divine, for with every advance comes recognition of the unsurpassable distance.

With this we return to our subject. The red heifer marks our recognition of the futility of our attempts to achieve perfection. We can look far and wide for a heifer sufficiently red and suitably whole, an unworked, untainted creature of beauty. And yet, even this exemplar of excellence and flawlessness is as nothing before God, and it is incinerated, every aspect of its perfection annihilated, as if it were just another sacrifice.

Moreover, it is also no coincidence that the fulfillment of the commandment of the red heifer—this exercise in self-negation—where we recognize the limitations inherent in man’s pursuit of excellence (indeed in the human condition itself), is upon the contraction of impurity from contact with a dead corpse. After all, nothing underscores the limitation of man and the infinite gap between him and God better than death.

But as man is exposed to death, how does the red heifer cleanse him? As man is confronted with his mortality, acknowledges his limitation, and is forced into retreat from his pursuit of perfection, how does the red heifer enable him to ‘‘once again swing forward,’’ as Soloveitchik puts it?  Having caught a glimpse of the massive metaphysical gap between himself and God, how can man come to terms? How can he return to his pursuit?

The answer lies in the paradox of the red heifer, which purifies the impure and defiles the pure: it humbles the haughty and reinvigorates the deflated. For as soon as its ashes and purifying water are sprinkled on man, he recognizes the gap, and acknowledges his role as man and his purpose in this world. The very recognition of the fact that man can never attain the level of the Divine, or even come close, is what allows man to return to his pursuit of perfection on earth.

Of course, like all explanations of his hok, it is not without its own weaknesses: the paradoxical juxtaposition of the pursuit of perfection and the recognition of insurmountable fallibility simply begs the question. Man’s material finitude is most evident in death; appropriately, his intellectual limitations are highlighted by the red heifer. The wisest of all men, Solomon, was overwhelmed by the mystery and forced to withdraw from it.  In so retreating, he demonstrated that he had, indeed, internalized the fundamental message of the red heifer.

Shlomo Zuckier is a Tikvah Fellow, and an editorial assistant for Tradition magazine. He is a rabbinical student and Wexner Fellow at Yeshiva University.

Eliyahu Konn on June 29, 2012 at 11:02 am (Reply)
The Paqid of the Netzarim has fully explained this hok. First, it should be noted that there is no definition in Torah of a hok - that it can not be understood. It is anti-intuitive for a father not to explain to his children why they should do something when they have accumulated enough reasoning power to understand.

The cleansing of one coming in contact with a dead body using the ashes of the red heifer is identical to the cleansing of the mtzora and the nidah. The red solution that is made along with the death of the red heifer is akin to the dying of the egg of the woman, a potential life, now dead, that is washed away with blood. The mtzorah, as Aharon the high Priest noted is like one dead, also needing a specially made solution, using guess what, cedar, hyssop, and red (shni toloath.)
What is it teaching?

To cleanse oneself from death. Death is what needs to be avoided but when it is touched it must be cleansed, i.e. made atonement for. Death is the state one is in when one rejects Torah or when one comes in contact with a dead body, (remember the separation of the nidah and the mtzora announcing his tamei, remember the penalty for willful intercourse with a nidah.) The full teaching is available in Hebrew at the following link:
http://netzarim.co.il/Calendar/Parah%20Adumah.htm
David Aharon Lindzon on July 2, 2012 at 10:54 am (Reply)
Among the interesting things about the red heiffer mitzvah is the Halacha that one who is Tahor [pure] is one who is made tamei [impure] publicly first and goes to the mikvah to become a tevul yom [one who is waiting for sunset] is allowed to be involved with the ashes according to the Rabbinic explanation. This opinion was contested in the 1st century CE by the Sadduccees and karaites who held that the word Tahor means one who is completely Tahor and not one is one degree away.

The far reaching implications is a human who is considered tahor has done everything within his or her power to become pure and is only waiting for the sun to set which is not in his control as a general rule [Joshua was the exception] can be involved in the various details of the red heiffer.
Thus unlike the mitvah of eating Teruma which requires that the Cohen be completely TAHOR and after the sun has set. [see Talmud Bavli Brachos 2 A 1st mishna].
It is also a law which challenges us to understand some things about its far reaching effects in our generation of the use of and misuse of fire ... the same fire that can warm up our homes can also burn the whole building down if it is not controlled and cause pollution to our environment.