In a new series, archaeologist and Jewish Ideas Daily contributing writer Alex Joffe presents an annotated slideshow of the history and culture of a material object. Here, the shofar.

The shofar has a singular importance for the Jewish people. Made of the horn of sheep, goat, mountain goat, antelope, or gazelle, the shofar is used to sound the birthday of the world on Rosh Hashanah.

Saadia Gaon explained that there were ten reasons for sounding the shofar, including these: to celebrate the crowning of the king of kings, to summon the people to repentance, to announce that the people assume the responsibility of the Torah handed down to Moses at Sinai, to commemorate the binding of Isaac, and to announce the coming of the Messiah. 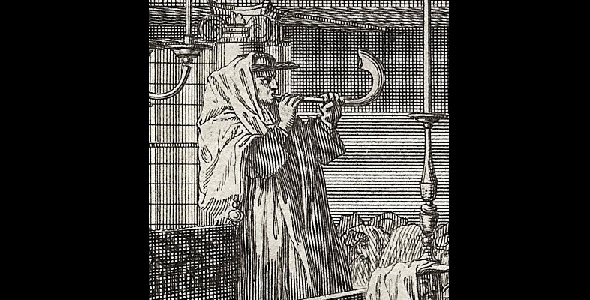 A detail from the nine-volume 18th century series Religious Ceremonies and Garments of the Peoples of the World, showing the shofar being sounded on Rosh Hashanah. Published in Amsterdam by the bookseller Jean Frederic Bernard and illustrated by engraver Bernard Picart, the volumes are notable for their sympathetic depitctions of Jews.
Shofar and the Giving of the Torah
Exodus 19:16
וַיְהִי֩ בַיּ֨וֹם הַשְּׁלִישִׁ֜י בִּֽהְיֹ֣ת הַבֹּ֗קֶר וַיְהִי֩ קֹלֹ֨ת וּבְרָקִ֜ים וְעָנָ֤ן כָּבֵד֙ עַל־הָהָ֔ר וְקֹ֥ל שֹׁפָ֖ר חָזָ֣ק מְאֹ֑ד וַיֶּֽחֱרַ֥ד כָּל־הָעָ֖ם אֲשֶׁ֥ר בַּֽמַּחֲנֶֽה׃
"And it came to pass on the third day, when it was morning, that there were thunders and lightnings and a thick cloud upon the mount, and the voice of a horn exceeding loud; and all the people that were in the camp trembled." 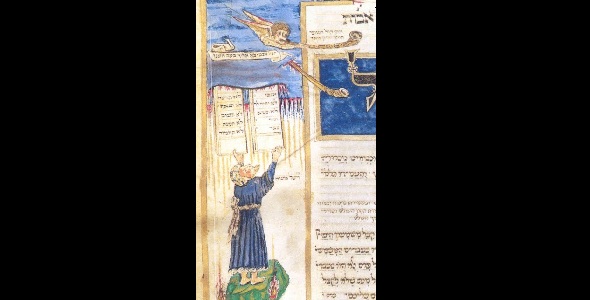 A detail from the Rothschild Mahzor, dated to 1490, in the collection of the Jewish Theological Seminary, showing Moses receiving the Tablets of the Law with a winged angel blowing the shofar. Images of Moses adorn the first portion of Pirkei Avot, which begins with the reception of the Torah.
Shofar as an everyday reminder of Identity 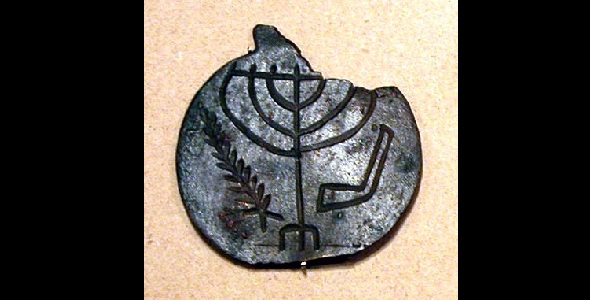 This 4th or 5th century C.E. bronze amulet shows three Jewish symbols: a lulav, menorah, and shofar. The reverse side bears the Greek inscription, "For the welfare of lady Matrona"—that is, a married Roman woman. It would have been worn as a protective talisman. The object is in the Reifenberg collection at the Israel Museum.
Shofar and the Temple
Exodus 19:13
בִּמְשֹׁךְ֙ הַיֹּבֵ֔ל הֵ֖מָּה יַֽעֲל֥וּ בָהָֽר׃
"When the ram's horn soundeth long, they shall come up to the mount." 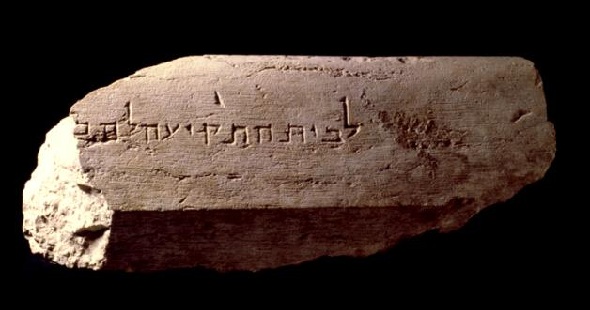 A stone from the 1st century C.E., inscribed, "To the Place of Trumpeting." Found in archaeological excavations along the southern wall of the Temple Mount, the stone is thought to have been part of the Temple platform, where priests sounded the beginning and end of the Sabbath. From the collections of the Israel Antiquities Authority.
Shofar as a Precious Object
Numbers 29:1
וּבַחֹ֨דֶשׁ הַשְּׁבִיעִ֜י בְּאֶחָ֣ד לַחֹ֗דֶשׁ מִֽקְרָא־קֹ֨דֶשׁ֙ יִֽהְיֶ֣ה לָכֶ֔ם כָּל־מְלֶ֥אכֶת עֲבֹדָ֖ה לֹ֣א תַֽעֲשׂ֑וּ י֥וֹם תְּרוּעָ֖ה יִֽהְיֶ֥ה לָכֶֽם׃
"And in the seventh month, on the first day of the month, ye shall have a holy convocation: ye shall do no manner of servile work; it is a day of blowing the horn unto you." 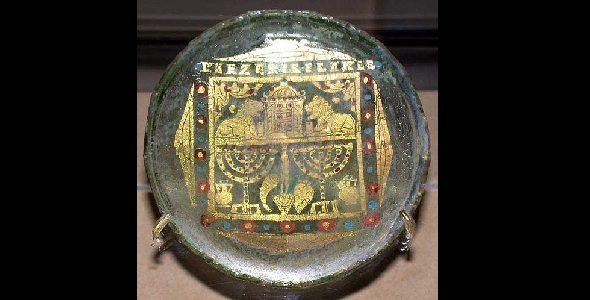 This base of a 4th century C.E. bowl or cup is decorated with Jewish symbols including two lions flanking an open ark bearing three Torah scrolls, two menorahs, a lulav, etrog, and shofar. Probably from a Roman catacomb, it was produced by gluing gold leaf onto a glass disk, etching it with the design, then blowing a glass bubble and encasing the gold. From the collections of the Israel Museum.
Shofar and the Akedah
Genesis 22:13
וַיִּשָּׂ֨א אַבְרָהָ֜ם אֶת־עֵינָ֗יו וַיַּרְא֙ וְהִנֵּה־אַ֔יִל אַחַ֕ר נֶֽאֱחַ֥ז בַּסְּבַ֖ךְ בְּקַרְנָ֑יו וַיֵּ֤לֶךְ אַבְרָהָם֙ וַיִּקַּ֣ח אֶת־הָאַ֔יִל וַיַּֽעֲלֵ֥הוּ לְעֹלָ֖ה תַּ֥חַת בְּנֽוֹ׃
"And Abraham lifted up his eyes, and looked, and behold behind him a ram caught in the thicket by his horns. And Abraham went and took the ram, and offered him up for a burnt-offering in the stead of his son." 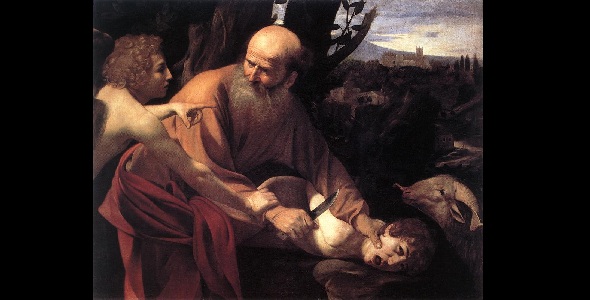 Caravaggio’s painting, Sacrifice of Isaac, was commissioned in 1603 by Cardinal Maffeo Barberini, later Pope Urban VIII. It is in the Uffizi Gallery in Florence. Caravaggio’s ram is close by; in contrast, Rembrandt’s famous painting of the same scene has the ram gazing uncertainly from the background.
Modern Reflections on the Akedah 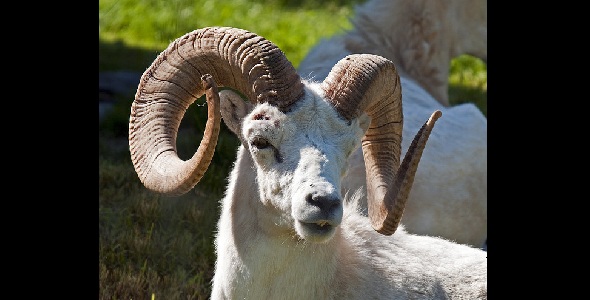 The real hero of the Isaac story was the ram,
who didn’t know about the conspiracy between the others.
As if he had volunteered to die instead of Isaac.
I want to sing a song in his memory—
about his curly wool and his human eyes,
about the horns that were silent on his living head,
and how they made those horns into shofars when he was slaughtered
to sound their battle cries
or to blare out their obscene joy.
I want to remember the last frame
like a photo in an elegant fashion magazine:
the young man tanned and manicured in his jazzy suit
and beside him the angel, dressed for a party
in a long silk gown,
both of them empty-eyed, looking
at two empty places,

and behind them, like a colored backdrop, the ram,
caught in the thicket before the slaughter.
The thicket was his last friend.

The angel went home.
Isaac went home.
Abraham and God had gone long before.
But the real hero of the Isaac story
was the ram. 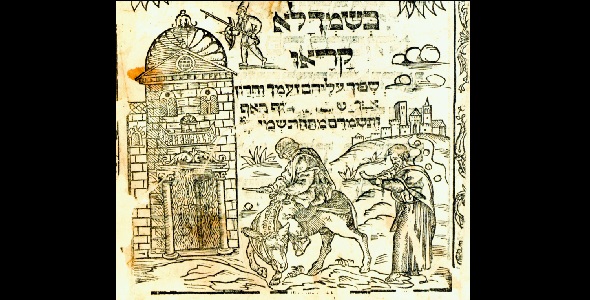 In this detail from the Mantua Haggadah, Elijah, with a shofar, heralds the Messiah before the gates of Jerusalem. Produced by a Christian printer under the supervision of an official of the Mantua synagogues, the Haggadah dates to 1560 and is currently in the Braginsky Collection.
The Shofar in Israel 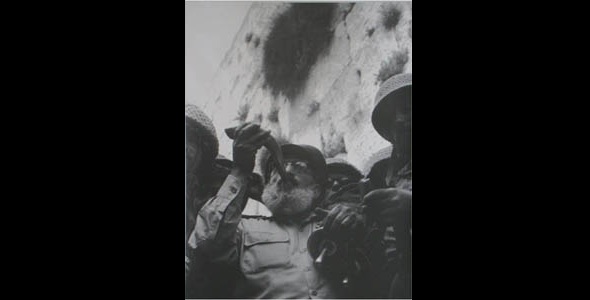 One of the most iconic images of the Six Day War is the picture of Rabbi Shlomo Goren, Chief Rabbi of the Israel Defense Forces, blowing the shofar at the Western Wall in the company of the paratroopers who liberated the Old City.
The Message of the Shofar
"Awake, ye sleepers from your slumber, and rouse you from your lethargy. Scrutinize your deeds and return in repentance. Remember your Creator ye who forget eternal truth in the trifles of the hour, who go astray all your years after vain illusions which can neither profit nor deliver. Look well into your souls and mend your ways and your actions; let each one of you forsake his evil path and his unworthy purpose. And return to God, so that He may have mercy upon you."
--Rambam 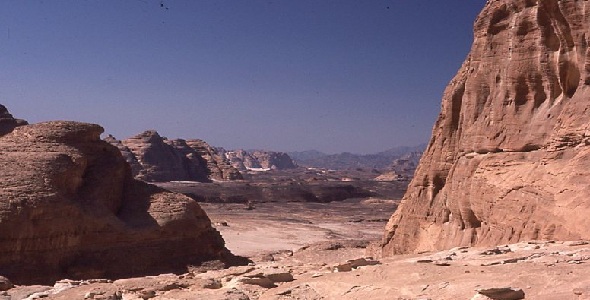 A view of the mountains of the southern Sinai, the traditional site of the giving of the Law to Moses. Taken by the author in 1980.
Tags: Archeology, Artifacts, Arts & Culture, Music, Object Lessons, Rosh Hashanah, Shlomo Goren, Shofar