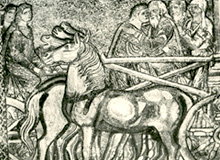 After Joseph reveals his identity to his brothers, he instructs them to return to Canaan and bring Jacob down to Egypt. When they inform Jacob that Joseph is not merely alive but the vice-regent of Egypt, "his heart became numb because he could not believe them" (45:26). However, when they report their whole conversation with Joseph to him and he sees the wagons that Joseph sent to transport him, "Jacob's spirit revived" (27). How did the sight of wagons persuade Jacob that "my son Joseph yet lives" (28)?

A simple reading of the text is self-explanatory. The brothers provided two pieces of evidence in support of the two assertions they made. The transcript of their conversation with Joseph was proof he was alive, while the wagons proved his elevated status. We need, however, to accept two reasonable, implicit assumptions: One, that Joseph's end of the conversation revealed information known to him alone, and two, that the wagons were noticeably regal.

The Midrash, though, never stops at simple readings and, in this case, collapses the two exhibits into one. The wagons themselves are insignificant; the key lies in the Hebrew word for wagon: 'agalah, which is assonant with the word 'eglah, heifer, which alludes to the subject of Joseph and Jacob's last conversation:

Joseph provided them with a sign concerning the subject of discussion when he parted from Jacob, namely the law of the decapitated heifer.

The law of the decapitated heifer stipulates that in the event of the discovery of a murder victim with no alleged perpetrator, the elders of the nearest settlement must publicly disavow responsibility for his death (Deuteronomy 21:7). Thereupon, a heifer is decapitated as a form of expiation for their having endangered a wayfarer by failing to provide him with proper escort. Since Jacob was escorting Joseph as he embarked on his mission to locate his brothers, the law of the heifer engaged them in conversation. Since Joseph was the only party to that conversation, it confirmed his identity.

The Torah commentary Da'at Zekeinim (The View of the Elders; France, ca. 13th century) is not persuaded: "It is difficult to explain wagons ('agalot) as referring to heifers ('eglah)." They offer an alternative:

It appears [more appropriate] to explain that they [were studying] the laws of the wagons of the tabernacle (Numbers 7:3).

This resolves the linguistic anomaly by replacing the 'eglah with 'agalah, but how do we bridge the chasm between Joseph's wagons, on the one hand, and the wagons that were donated by the princes of Israel to the mishkan (tabernacle), on the other?

No problem; the Midrash spins a web of events that links all of our otherwise isolated particulars and even throws in some additional details for good measure.  When solicited, later, for contributions to the construction of the tabernacle, the Israelites donate, among other items, "acacia trees" (Exodus 25:5). Where did they get trees in the wilderness?  The Midrash replies:

Indeed, the very next verse  stipulates that Jacob made a stopover in Beersheba on his way to Egypt. There, God appears to him in a vision and reassures him of His company on the way down to Egypt and on the way back up.  For what purpose did he stop there and how does God's company manifest itself? Following the midrashic pattern, we would say that Jacob stopped to cut down trees. Why those particular trees? Because "Abraham planted a tamarisk in Beersheba" (Genesis 21:33).  How did Jacob transport them to Egypt?  In Joseph's wagons, of course! And how were they transported through the wilderness and back to the Land of Canaan? In the wagons contributed by the Israelite princes.

Decoding the Midrash, we discern a thread of providence connecting the dots between Abraham and the tabernacle and passing through Jacob, Joseph, and Moses. When the Israelites finally built the mishkan, they were-perhaps unintentionally-completing a project for which the foundations had been laid by their ancestors. Its meandering path passed through Beersheba on its way to Egypt and back, and its manner of conveyance ranged from regal carriages to princely wagons.

And not just any trees were used to construct God's residence on earth, but trees that personified the builders: Although uprooted from their native land and transplanted in inhospitable circumstances, they never abandoned their faith in their ultimate redemption and restoration.

As Nahmanides was wont to say: "The deeds of the fathers are a precursor for their children."