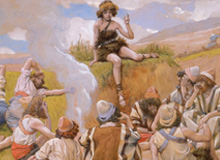 Arlo Guthrie, the Jewish folk singer, likes to call him "the 'they-went-that-a-way' guy."  He is the man who tells Joseph where to find his brothers.  If Joseph did not find them, Guthrie points out, his brothers would have no opportunity to throw him into a pit and he would not have been sold down to Egypt.  Everything that naturally follows would also fail to occur:  Joseph would not be able to interpret Pharaoh's dream; there would have been a famine in Egypt as well as Israel; Jacob and his sons would not go to Egypt, grow into a nation there, be enslaved, and then be freed; and there would be no story to tell—no Bible and thus no Western civilization.  All because one guy was at the right place at the right time to say, "They went that-a-way."

To recap the situation:  Joseph (in the first of the three sets of two dreams that structure this story) has dreamed that his family would bow down to him.  He has told his father and brothers of the dreams, and his brothers hate him because of them.  The brothers have taken Jacob's flocks to the vicinity of Shechem to pasture them, and Jacob sends Joseph to find out how they are.

When Jacob gets there, however, the flocks and the brothers are gone, and "a man" (Gen. 37:15) finds him wandering aimlessly in the field.  "What are you looking for?" the man asks.  "For my brothers," Joseph replies.  "Tell me, where are they pasturing?"  The man tells him, "I heard them saying, 'Let's go to Dothan.'"  Joseph follows them to Dothan . . . and the rest is history.  Make that "History" with a capital H.

In plain English—who was this man?  Rashi (France, 1040–1105), the most famous of the traditional Jewish commentators on the Bible, explains: "It was Gabriel."  In Daniel 9:21, this angel is referred to as "the man, Gabriel."  So obviously when an unidentified character called simply "the man" tells Joseph where his brothers are, it must be Gabriel.

In Back to the Sources, Edward Greenstein's "Medieval Bible Commentaries" chapter contains a complete discussion of this passage, along with a wonderful introduction to the world of the medieval commentators and a delightful skit turning their comments on Gen. 37:15 into a conversation.  For now, it's enough to look at the comment of Nahmanides (Spain–Israel, 1195–ca. 1270), who explains:

The Holy One provided Joseph with an unwitting guide in order to give him into his brothers' hands.  That is what our Sages meant when they said that such men are "angels."  This is not just a story; its purpose is to let us know that "The human mind may devise many schemes, but it is the Lord's plan that is accomplished" (Prov. 19:21).

The Hebrew word for an angel is malakh, but this is simply the word for a messenger, someone who is sent (whether by God or by a human being) to accomplish a particular task or melakhah.  Nahmanides' understanding of our story is that this man was in the countryside near Shechem for his own purposes and merely happened to overhear the brothers and then to encounter Joseph.  But, says Nahmanides, such things do not really just "happen."  This man had no idea that God was using him to start the Israelites on their way to slavery in Egypt.  It was not really Gabriel—but calling Gabriel "the man" was a hint to us, the readers of the story, that this man going about his own business was also, unwittingly, going about God's business.

And this is what Nahmanides would call a miracle.  He was, of course, well aware of the flashier kind of miracle, of which the Bible is full: the splitting of the Red Sea, the sun standing still for Joshua, and so on.  But Nahmanides insisted that there were many, many more "natural miracles."  That is, many events that seem to be following the ordinary course of nature are in fact, independent of whatever human scheme they are intended to further, arranged by God to accomplish the divine plan.

Is that really true?  By definition, we can never know.  Those who pray for a miracle may be hoping for the kind that is accompanied by special effects, but most people's experience suggests that any miracles that occur nowadays are likely to be of the natural kind.  If you are hoping for a miracle that has not yet occurred, you may or may not take comfort in the recent suggestion of another Jewish singer, Kobi Oz, that your miracle is probably on its way, but has gotten stuck in a "Traffic Jam of Miracles."  The more miracles there are, the harder they are to schedule.

The other message to take away from Rashi's and Nahmanides' comments on our story is a bit more surprising.  Miracles of this "natural" kind would be done not just for you—but by you.  When you give a stranger directions, step aside to let someone pass, or hold the elevator door, you may be doing an unwitting miracle of your own.  All it takes to save Western civilization (it seems) is finding the right moment to say, "They went that-a-way."