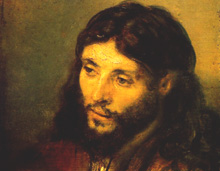 As Jacob prepared to bed down for the night at Beth El, he selected "among the rocks of the place" (me'avnei ha-makom; Genesis 28:11) to set by his head. He awoke in the morning having dreamt of a ladder reaching heavenwards and angels ascending and descending it, which the Sages took to represent the rise and fall of the four great kingdoms of history to which the Jews were successively subjugated. Jacob then took "the stone (ha-even) . . . and set it as a monument” (28:18). According to Rashi (1040–1105), Jacob initially selected several stones, which, arguing among themselves over the honor to prop up the patriarch’s head, were miraculously fused together overnight. His grandson Rashbam (1089–1158), however, maintains that the fact that there was but one stone when Jacob awoke is proof positive that there was only one when he went to sleep.

When Jacob subsequently arrives at Haran, he discovers that the local well is covered by "the stone" (ha-even; 28:2), which he proceeds to roll off—singlehandedly—in an apparent attempt to impress Rachel. According to talmudic legend (aggadah), Jacob, at this juncture, is 77 years old—an advanced age at which to be attempting carnival feats just to impress a comely maiden. What if he had failed? Could it be that Jacob's supreme confidence in his ability to maneuver "the stone" was due to his recognizing it as "the stone" he had previously manipulated into a monument? And if so, how had it gotten from Beth El to Haran? It must have rolled there.

While the insinuation of a "rolling stone" into the Bible seems, at first glance, preposterous, one midrash has the stone literally roll (ve-nitgalgelah ha-even) to a precise location on Mount Moriah, where it became imbedded in the ground. It was then transformed into the even ha-sh'tiyah, the Foundation Stone, above which the Holy of Holies of the Temple would later rest. As such, it would come to be known as the "omphalos," or navel of the world; the point from which everything of consequence emanates.

"The stone" reappears, however, in later biblical episodes and eventually becomes a motif in the collaborative work of two seminal figures of the 17th century.

Menasseh ben Israel (1604–1657) was born to a family of conversos that had fled Portugal on account of the Inquisition. In 1610, they moved to Amsterdam, where Menasseh was recognized as a prodigy. He founded the first Hebrew press in Holland and became an author and editor of note. Among his many self-published works was Mikveh Israel (The Hope of Israel, 1655), which was instrumental in persuading Oliver Cromwell to readmit Jews to England.

A firm believer in the impending messianic age, he wrote several treatises on this theme. Among them was Piedro Glorioso o de la Estatua de Nebuchadnezzar (The Glorious Stone of Nebuchadnezzar's Statue; Amsterdam, 1657). The book, which describes four messianic biblical scenes illustrating the redundancy of "the stone," was accompanied by four etchings prepared by Menasseh's friend, Rembrandt.

Rembrandt lived for 25 years in Amsterdam's Jewish neighborhood and was well acquainted with a number of its residents. A portrait he drew of a scholar bent over a book (otherwise identified as "Faust in his study") may actually be of Menasseh ben Israel, who was likely the source of Rembrandt's information—and, quite possibly, his inspiration—about the Jewish Bible.