Toldot: The Blinding of Isaac 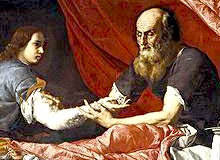 If you take a fresh, unadorned look at the life of Isaac, son of Abraham, you might feel like you've walked into a bad remake of a great film. Many of the same plot lines are there, but without much of the magic.

Isaac's whole story appears in this week's reading—and all of it a pale reflection of his father's adventures. Like Abraham's wife Sarah, Isaac's wife Rebecca is barren until the intervention of the Divine. When she finally gives birth to twins, Isaac prefers the (slightly) older Esau while Rebecca prefers Jacob—mirroring Abraham's preference for the older Ishmael over Sarah's preference for Isaac. God clearly sides with the women in both cases: He tells Abraham to "harken to [Sarah's] voice," while in our reading he tells Rebecca that "the older [Esau] shall serve the younger [Jacob]."

Soon after, God speaks to Isaac (the only such direct communication he receives) and tells him not to go to Egypt despite the famine, but rather to stay "in this land . . . and I will perform the oath which I swore to Abraham your father; and I will multiply your seed as the stars of heaven . . . " Again, the parallel to God's promise to Abraham is sharp and clear.

The parallels continue with Isaac's encounter with Avimelekh, King of Gerar. To protect his life, Isaac lies to Avimelekh, telling him that Rebecca is his sister—just as Abraham did with Sarah. (This time around, however, Avimelekh doesn't take the bait.) Isaac grows rich under Avimelekh's protection—as did his father. Then he re-digs the same wells that Abraham did in his day. Finally, Isaac makes a deal with Avimelekh, taking an oath of alliance, as his father did, and even naming the city of Beersheva after the oath, as his father likewise did.

The final story of Isaac, in which Jacob tricks Isaac into giving him a blessing that he had intended for Esau, may not seem at first like a replay of an episode in Abraham's life. But in some ways it is. We may call it "the Blinding of Isaac," for the similarities it shares with Abraham's Binding of Isaac. Again, we have a story in which the patriarch is deceived: Abraham by God, into putting Isaac on the altar; Isaac by Jacob and Rebecca, who swindle Esau's blessing out of him. In both cases, what's at stake is a father sacrificing his beloved son.

And yet, despite the parallels, all along the way we have a sense that Isaac is no Abraham.

Isaac never clashes with Rebecca over their two children, the way Abraham does with Sarah. When Abraham goes to Avimelekh and lies about his wife, he packs it with a moral punch: "Because I thought, Surely the fear of God is not in this place." Isaac merely says, "Because I said, Lest I die for her." Abraham digs new wells, while Isaac merely re-digs old ones—a striking symbol of the original, creative actor versus the pale imitator. Abraham makes his wealth as a freewheeling shepherd, while Isaac makes his as a farmer. (The Bible everywhere prefers the shepherd over the farmer; think Cain and Abel.) Isaac speaks with God just once, while Abraham has various, fascinating discussions with the Divine.

Indeed, we are left with two strikingly different figures, whose differences are made all the more apparent by their similarities. In many ways Isaac is the anti-Abraham, passive, imitative, and cautious where his father was active, original, and bold even to a fault.

These are the two figures that Jacob carries with him as he begins his own tale, two paradigms that end up laying the groundwork for the whole Israelite nation. In everything he does, Jacob will be choosing between Abraham and Isaac—creating a tumultuous, complex, and ferociously contradictory inner story of Israel that resonates throughout the Bible, and onward in history.