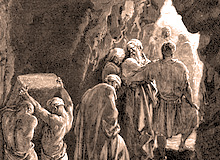 This weekend, as in years past, thousands of visitors from around the world will spend Shabbat among the Jewish community of Hebron, marking the occasion of the liturgical reading of Abraham's purchase of me'arat ha-makhpelah, the "double cave," as Sarah's burial vault. How did such a personal and relatively mundane act as the interment of a loved one come to assume the national significance with which it has been endowed?

The transaction itself is straightforward: Abraham pays Efron, a Hittite, money; Efron sells him the property. But given the story's context in an often terse biblical text, there are a number of hints that the story is of larger significance.  Not only are the details of the sale recorded, but the accompanying dialogue is as well, suggesting that the social context in which the purchase took place is relevant to the legal act. But even so, why does the Torah lavish such detail on such a commonplace occurrence? Or, as the 19th-century commentator Malbim (1809–1879) asks in a similar vein: "What salvation does this story offer us in respect of law or custom?"

The midrash was the first to note the outsized significance of this episode:

This is one of the three places wherein the nations of the world are unable to defraud the Children of Israel by accusing them of robbery.

Along with a field in Shekhem purchased by Jacob (Genesis 33:19) and the granary atop Mount Moriah acquired by David (2 Samuel 24:24), the midrash considers the status of the double burial cave in Hebron as a voluntary and uncontestable sale of real property to Jews in the land of Israel.

But the most remarkable feature of this midrash is not its spirited defense of Jewish landownership but its revelation that as early as the first centuries of the Common Era, the "nations of the world" were already accusing the Jews of usurping the land of Israel. Indeed, in the very first passage of his biblical commentary, Rashi (1040–1105) cites another midrash which reflects an identical concern.  Theorizing as to why the Torah begins with the creation narrative instead of the giving of the first commandment, Rashi relays the following dialogue:

Rabbi Isaac said: Why did the Torah not begin with "This month is to be the first of months for you" (Exodus 12:2), which comprises the first mitzvah with which Israel was charged? Rather, "The force of His deeds [i.e., Creation] He related to His nation, to give them the territory of other peoples" (Psalms 111:6). If the nations of the world were to say: "You are robbers who have conquered the territory of the seven [Canaanite] nations," you may reply: "The entire world is the property of God [its creator] who may allocate it to whomever He wills."

Nahmanides (1194–1270), whose commentary regularly clarifies that of his predecessors (Rashi in particular), interprets the narrative accounts of Genesis as evidence that God's gift of the land of Israel to the people of Israel was not unconditional. Just as Adam was expelled from Eden on account of his sin, and the builders of the tower of Babel were similarly punished with dispersion, Israel, too, would forfeit its claim to the land were it to disobey a divine edict.

Nearly two millennia later, and in light of this caveat, we see how necessary Abraham's safeguard of fair purchase really was.  In a different context, Nahmanides coined the axiom, "the deeds of the fathers are a precursor for their children."  Time and time again, we see this principle confirmed, as with today's "nations of the world," who persist in perpetuating the canard prefigured so accurately in the midrash.