Vayera: The Binding of Abraham 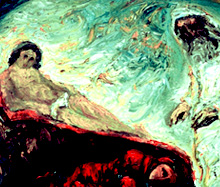 First, God decides to destroy the evil cities of Sodom and Gomorrah with fire and brimstone. When He tells Abraham of his plan, Abraham jumps to their defense: "Will you destroy the righteous with the wicked? Perhaps there are fifty righteous people in the city . . . Shall the judge of all the world not do justice?" This is followed by a famous bargaining session, with Abraham lowering the threshold at every step. In the end, God agrees to spare the cities even if they have only ten righteous men (which, apparently, they don't).

The message here is that man is so independent in his moral thinking, so alive and judgmental and grand, that even God must come under his critical gaze.

But then, at the end of this week's reading, we have what feels like the opposite story. God "tested Abraham," telling him to sacrifice his son Isaac. Abraham rushes to do the deed. At the last minute, an angel appears, telling him to stay his hand, "for now I know that you fear God."

The message here is that man should be so subservient to God in his moral thinking that he will do even transparently abhorrent things if it's what God instructs.

How can we reconcile the two? Should we rise up to challenge God's injustice, or defer meekly, and accept God's will?

Here's one easy answer: These two stories are talking about two different matters. Sodom is about a man's thoughts, the Binding of Isaac about a man's actions. Think independently, we are being told, but as soon as it comes to acting on God's will, we must suppress our concerns, even moral ones, and get moving.

I don't buy that answer. First, because you can't really separate thought from action this way. In the episode with Sodom and Gomorrah, Abraham wasn't just thinking, he was acting—attempting to prevent the actual destruction of the cities through an appeal to God's sense of justice. Second, in our lives, God doesn't actually tell us what to do. As none of us—including the intended readers of these stories—is a prophet, the possibility of having something "revealed" to you that contradicts your understanding of right and wrong is zero. As thinking people, all we have are traditions of right and wrong that we believe coincide with God's will. So unless this was meant to be a moral lesson for future prophets only, we'll need a better answer.

The answer, I suggest, is revealed by a third Abraham story in this week's reading, one which appears between the other two.

In this third story, Abraham travels to the Philistine city of Gerar, visiting the local King Avimelekh. Out of fear that the king will kill him to take his wife Sarah, Abraham tells Avimelekh that Sarah is his sister—whereupon the king takes Sarah to bed with him. Fortunately, he prematurely passes out before completing his conquest. That night, God comes to Avimelekh in a dream, and tells him to give her back, as she's really Abraham's wife. Avimelekh pleads ignorance, and innocence, and God tells him: I know you're innocent, just give her back.

The next day, Avimelekh confronts Abraham to ask him why he lied.  Abraham says: "Because I thought, Surely the fear of God is not in this place; and they will slay me for my wife's sake."

This is not really a good answer. Effectively, Abraham is saying: I thought you were evil, so I lied and tricked you into (almost) committing adultery. Avimelekh responds by sending Abraham away, with some lovely parting gifts to keep things civil. Yet there is something very troubling about this story.

Abraham, it seems, misjudged Avimelekh. He assumed his host was thoroughly evil, and as a result, he ended up deceiving the king and sacrificing his innocent wife, all to save himself from a wrongheaded fear.  In other words, he did precisely what he accused God of doing to Sodom and Gomorrah—judging without doing justice. Having gone head-to-head with God over morality, we now suspect Abraham's morality has gone to his head.

God seems to share in this suspicion as well. Later on, Abraham and Avimelekh reconcile over a seven-lamb dinner, followed immediately by the Binding of Isaac episode.

Is it possible that God is responding to the Avimelekh debacle by testing Abraham? The text gives us a clue. Both episodes speak of the "fear of God"—a term very rarely used in the Books of Moses.  Abraham, we surmise, sinned because he wrongfully presumed that Avimelekh had no fear of God, so God tests Abraham to see if he, who so blithely issued judgments of others, has that fear himself.

I have often heard it suggested that Abraham knew all along that he was being tested, and that in the end he wouldn't have to sacrifice his son. I can accept that, for it's the only way to believe that the Abraham who challenged God over Sodom is the same man as the one who gets up early in the morning to slay his own son at God's instruction. At the same time, we have to assume that even if he did know how it would all turn out, the experience must still have been utterly horrifying—and exceptionally humbling. Having accused the world of lacking the fear of God, he now has to prove his own, in the most awful way.

What we're left with, in other words, is a case of character development. Over the course of three stories, Abraham grapples with his own moral independence and outrage, and discovers that sometimes the very act of judging others risks making you worse than them. In his failure, Abraham discovers that life's burdens are far too complex to allow us to turn moral judgment into a discus that we hurl at other people to affirm our own stature.  And that in the end, when God tests us, the test is often a direct consequence of our own actions.