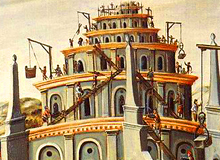 What's wrong with the Tower of Babel?

At first glance, the famous story that closes out this week's reading seems pretty straightforward. The men of Babel build a tower to Heaven. God doesn't like being challenged this way, so He disperses them and confounds their tongues. It's a parable, a story of origins—of human language and perhaps of Babylonia—as well as a rejection of hubris.

But as so often happens with these ultra-concise biblical tales, the closer you read it, the weirder it gets.

First of all, I could be wrong, but this might be the only story in the entire Bible (other than the first days of Creation) in which there are absolutely no individual human beings. Decisions and actions in Babel are undertaken by an unnamed, collective mass acting in perfect unity. The people of Babel "say to each other": Let's build a tower! So they do, and God responds.

A second issue concerns the text's bizarre focus on materials. For a story just nine verses long, why focus a particularly long one on the bricks they used to build the Tower? "And they said to one another, Come, let us make bricks, and burn them thoroughly. And they had brick for stone, and slime had they for mortar" (Genesis 11:3).

Lastly is a far more difficult problem which has troubled me for years: The text never tells us what's so bad about what they did. The men of Babel never say they want to challenge God, only that they want to "build us a city and a tower whose top may reach to heaven," so that they could "make a name" for themselves (Genesis 11:4). But is that so bad? What's so wrong with unifying mankind, with joining together to reach the heavens? Isn't harmony an ideal, and discord a curse?

To begin to answer these questions, we look to parallels. The obvious one is to the Garden of Eden. There, too, mankind (at this point, made up entirely of Adam and Eve) sins together by eating the fruit of the Tree of Knowledge of Good and Evil, embraces powers beyond their legitimate ken, threatens to break through the impossible barrier between man and God, and is punished with exile. That's a tough story to parse as well, but what seems to emerge is a warning against trying too hard to be too powerful, against seeing ourselves as gods. ("Like one of us," God says in Genesis 3:22.)

So part of the problem in the Tower of Babel is clearly the classic warning against arrogance, the sheer cheek of thinking that if there are no humans to oppose us, then we might as well be gods.

But I think there is more to the Tower of Babel. While Adam and Eve are individual humans, the people of Babel are so unified as to eliminate any sense of their individuality, their capacity for thinking or acting independently. The Bible is telling us that we must never allow ourselves to be cogs in a machine, to act in absolute collective coordination. The story suggests that perfect unity is evil—that the future of mankind rests not in our ability to work together but rather to (in the current parlance) "think different," to hold on to our differentiating, individuating, sore-thumb selves. This is, in a sense, a total repudiation of some of the most devastating cultural and political forces over the last few centuries, and it's pretty amazing to see it so clearly in a text so old.

Again we find our text in dialogue with the Garden of Eden. "It is not good for man to be alone," Genesis teaches us (2:18). For the first man, multiplicity was the solution to loneliness. In the Tower of Babel, it's the solution to blindness, one that comes from subordinating our will and conscience to that of the masses. Elsewhere the Torah warns judges never to follow the will of the mob. The Israelites were not an undifferentiated nation, but individuals divided into twelve tribes, their nation a linked federation, their stories the stories of individual prophets and kings and judges, their kingdom divided for most of their history.

Now, add to it the question of the material, the bizarre focus on the bricks, and suddenly you have a commentary that sounds eerily post-modern. "Bricks for stone"—the men of Babel saw their power as expressed in their technology. The invention of brick was probably for them like flight was a century ago. Suddenly buildings could soar to heaven! All hail the works of our hands! If modernity is about technological progress leading to moral progress, this story says: Not so fast. Sometimes, technology can be our own undoing.

Ultimately, of course, these two issues—the loss of individuality and the reverence for technology—are two sides of a coin. For when we believe we are all part of a great big machine or that we may be easily explained through the mechanistic eye of science, love and passion and creativity become but an illusion. In nine short verses, the Tower of Babel exposes these beliefs as a threat to our very humanity, to love, to individual passion, and to the deepest, most divine truths about our special, creative, human souls.

The Tower of Babel is at once comedy, tragedy, and devastating critique. Comedy, because of its farcical treatment of man's caprice and hubris; tragedy, because we all know about the horrific effects of a whole society reaching too far and falling over.

Above all, though, it's the critique that grabs us. This critique tells us that in unity we are not always at peace, but sometimes at war with God; not always good, but sometimes deeply evil; not always our true selves, but sometimes trying too hard to be someone else. Our inventions, from gadgets to grand systems of governance, may well empower us, but as soon as we let them overtake our judgment and humility and humanity, let them convince us we can achieve anything as long as we submit wholly to their magic—then we begin climbing a tower so tall that we might just run out of oxygen before we get anywhere close to heaven.