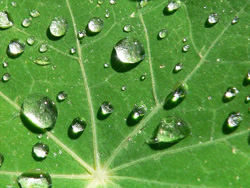 It's one of the least-sung songs in the Bible.  Known as the "Song of Moses," or shirat ha'azinu among traditional Jews, the poem that takes up almost the entirety of this week's Torah reading is twice as long as Moses's better-known Song of the Sea, which appears right after the parting of the Red Sea in Exodus and is part of Judaism's traditional daily morning prayers.  If the Song of the Sea was Moses's hit single, the Song of Moses was the B-side.

Yet in many ways, the Song of Moses is by far the more important of the two.  Nearing the end of his final address to Israel, just after being told he is about to die, Moses calls upon the Israelites to "write this poem for yourselves, and teach it the children of Israel; put it in their mouths, that this poem may be a witness for me against the children of Israel" (Deuteronomy 31:19).

Witness, indeed.  On the cusp of the Promised Land and what looks like the end of their seemingly endless trials, Moses serves up a shocking warning to the Israelites: My song may be over, but yours is just beginning. If today you have learned to revere God and accept His leadership, tomorrow you will inevitably slip up, forgetting the eternal truths that brought you here and taking everything your forefathers struggled to achieve for granted.

Though its language is lofty, the song's central themes are straightforward.  After some preliminaries ("My doctrine shall drop as the rain / my speech shall distil as the dew" (32:2), Moses recaps all of human history as a tale of love and betrayal between Israel and God.

At first, God lovingly cared for the Children of Israel ("He kept them as the apple of His eye. / As an eagle stirs up her nest, / broods over her young . . . / so the Lord alone did lead him, / there was no strange God with him").  But Israel couldn't keep its head clear, and began following false gods ("With abominations they provoked him to anger. / They sacrificed to powerless spirits; to gods whom they knew not").  God withdrew His protective cover, and the Israelites were left to the mercy of other powers.  The Israelites were devastated and scattered by cruel nations whose "grapes are the grapes of wrath," and God is left wishing that His people had a little more wisdom, gratitude and memory.  The song concludes with a reminder of who God really is: "See now that I, even I, am He / and there is no god with me. / I kill, and make alive; / I wound, and I heal. / Neither is there any that can deliver out of my hand" (32:39).

There's enough in the Song of Moses to keep theologians busy for millennia.  What's missing?  No mention of keeping mitzvot per se, nor even of the covenant in its formal sense.  In this final song-as-witness, the Ten Commandments are but a vague memory, the Tabernacle and its services suddenly trivial.  Only one thing is important: a deep, emotional, unbreakable loyalty to God.  That is, the subordination of all our calculations to Him, the absolute and unconditional refusal to bring "other gods" into the picture.

Scholars often have a hard time with the Song of Moses.  For some, who scour the Torah for legal jots and tittles, there is little of interest here.  Others will quickly point to the stylistic differences with the rest of Deuteronomy, and they too will avert their gaze from the contents because questions of authorship and dating are more meaningful to them.

These scholars ignore the contents of the Song of Moses at their own expense.  What we have is a soaring song, unparalleled in its scope and expressiveness, positioned in such a way as to make it the bottom line of the whole Torah, a declaration of eternal verities, a cornerstone of faith, a motion to adjourn.  With it comes a message no modern-day Child of Israel can ignore, regardless of denomination or ideology: Without gratitude to the Creator we are nothing; without loyalty to him we are tossed to the winds; without the hope he gives us, we are left relying solely on our own works—and against the roaring tide of human history, these are but dust.

Can a more powerful message be voiced just days before Yom Kippur?