Nitzavim-Vayeilekh: The Song of Torah 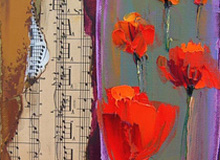 "Now, write for yourselves this song [shirah]; teach it to the Children of Israel and place it in their mouths . . . " (Deuteronomy 31:19)

These are the directions Moses gave to the priests and elders, in whose care he entrusted the song, with instructions to read it to the entire community of Israel on the occasion of their gathering in the Temple on the festival of Sukkot. As a working example, Moses then proceeds to teach the song himself.

We have, thus far, encountered two songs in the Torah: the song at the sea (Exodus 15) and the song of the well (Numbers 21:17).  A third song, Ha'azinu (Hearken ye heavens), is forthcoming in the very next chapter (Deuteronomy 32:1). To which song is Moses referring?

Medieval exegetes, by overwhelming consensus, identified Moses's song as Ha'azinu.  But the Talmud (tractate Nedarim 38a) declares that the entire Torah is the song. This troubles Rabbi Naftali Zvi Yehudah Berlin ("the Netziv," 1816-1893), dean of the eminent Volozhin yeshiva and author of a Torah commentary entitled Ha'amek Davar (A Matter Profound). In its preface, he asks rhetorically how the entire Torah could be designated a song when it is not written as poetry?

His response is that in fact, the Torah possesses "both the nature and singularity of poetry, which is to speak in lyrical language":

Everyone who is knowledgeable and has some education knows that lyrical prose is distinguished from narrative prose in two ways that pertain to their nature and singularity: (a) Poetic descriptions are not as comprehensive as prose and require marginal annotations . . . ; and (b) There is a tendency to embellish poetry with allusions that are extraneous to the poem itself—such as acrostics—a characteristic that is exclusive to poetry and not to narrative prose.

By equating the Torah with poetry, the Netziv was seeking to address the concerns that were motivating criticism of the talmudic-rabbinic tradition—namely that its directives and constraints were conclusions that were read (often forcibly) into the Torah rather than growing out of it naturally. His counter-argument is that the meaning that critics mistook to be superimposed on the text was either masked by the lyrical nature of biblical prose (even in its legislative portions!) or derived from the ostensibly extraneous allusions adorning its presentation.

In so doing, the Netziv was following in the pioneering path blazed a generation earlier by Rabbi Yaakov Zvi Meklenburg of Koenigsberg (1785-1865), author of the Torah commentary Hak'tav V'hakabbalah (The Text and the Tradition), who sought to deflect the similar assaults of the Enlightenment as follows:

Do you not know, Children of Israel, have you not heard, Community of Jeshurun; there is a great advantage to the spoken word over that which is only written . . . The speaker's manner of discourse, his posture while speaking, the tensing and relaxing of his elocution—these all are keys in the listeners' hands to open the chambers in which the speaker's thoughts lie dormant.

Just as a speaker's "body language" is as integral to a speech's delivery as the words themselves, so does the Kabbalah, the talmudic-midrashic tradition, reveal insights into the text that are an authentic part of its original delivery—if undetectable from its literal meanings.

The song of Torah, then, is hardly static. While its libretto never changes, it can take innumerable melodies—provided those melodies are consistent with the traditions of the community choosing to endow its particular prose with the singularity of poetry.