D'varim: "Weeping for the Generations" 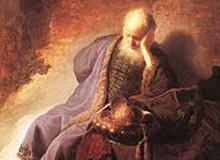 This week's portion, which inaugurates the book of Deuteronomy, is traditionally read on the Shabbat immediately preceding Tisha b'Av, the ninth day of the month of Av, the anniversary of the destructions of both the First and Second Temples. In recognition of this coincidence, many congregations chant Moses' plaint, "How (eikhah) can I, alone, bear your load, your burden and your arguments" (1:12), to the tune of the book of Lamentations, whose first word is likewise eikhah.

In our coverage of the portion of Sh'lah (Numbers 13:1–15:41), we observed that the men Moses sent to investigate the quality of the land and the mettle of its inhabitants returned with a report so disheartening that it moved the Israelites to tears. We also noted that the Talmud dates this incident to the tragic ninth of Av, thus establishing it as a portentous "weeping for the generations" (b'khiyah l'dorot), a mournful precedent for three millennia of Jewish history.

This "weeping" is consistent with the traditional view of Deuteronomy as, foremost, the record of Moses' rebuke of the Children of Israel for their mutinies against God and for the grief they caused him personally. Curiously, however, Moses reserves his sharpest criticism for the episode of the spies, whose reiteration occupies more than one half of our opening chapter. What distinguished this episode to deserve such single-minded censure?

Rabbi Obadiah Seforno (Italy; 1475–1550) finds the answer in the juxtaposition of the episode of the spies (1:22–46) to the section immediately preceding it (13–18), in which Moses—elaborating on his own plaint, with which we opened—recounts his establishment of a judiciary and his appointment of "captains of thousands, hundreds, fifties, and tens" (1:15).

This was recounted to remind them of their iniquity. Despite [Moses] having informed them that they would enter the Land without waging war—a land that was more valuable and more significant than any of their possessions or concerns in the wilderness—they did not refrain from instigating disputes among themselves to the extent that [Moses] had to appoint levels of judges, until every ten [Israelites] required their own judge! This can only be the result of malevolence.

Instead of transcending all the trials and tribulations that beset them and devoting themselves to their larger objective, the Israelites wallowed in their petty squabbles. In a word, they were done in by their excessive litigiousness.

The midrash on Lamentations, ever alert to linguistic and literary nuances, recognizes that there is yet a third biblical verse featuring the word eikhah: "How (eikhah) has the faithful metropolis [Jerusalem] become a harlot?" (Isaiah 1:21).

Rabbi Haim Sabato, a yeshiva dean and popular Israeli author, explains the midrashic moral as follows: The ladies-in-waiting are the intermediaries between the matriarch and the king, just as Moses and the prophets interceded between Israel and God. Moses recognized the Israelites' propensity to sin even when they were in a state of relative tranquility and cautioned them with eikhah. Isaiah saw them in flagrante delicto, so to speak, and chastised them with eikhah. Jeremiah witnessed their disgrace, the consequence of their recklessness, and he, too, lamented: eikhah.

Alas, this same litigiousness continues in our day, and contemporary society is well familiar with a judiciary of "thousands, hundreds, fifties, and tens" to remind us of our iniquity.  It is somewhat chastening, in this regard, to note that the country with the highest percentage of lawyers in its population is Israel.