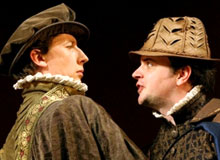 This week's reading, Mas'ei, closes out the book of Numbers. It is named for the travels (masa'ot) of the Israelites during their approximately four-decade sojourn in the wilderness.

The Torah enumerates 42 stations along the way from Egypt to the Promised Land.

Since they are now in "the Plains of Moab, opposite Jericho" (33:50) and about to cross into the land of Israel, the reading proceeds in chapter 34 to delineate territorial boundaries and enumerate the tribal elders designated to oversee the distribution of the land under the overall supervision of Joshua and the high priest Elazar. The Torah next provides for the allocation of 48 cities for the use of the Levites, who received no regular patrimony (35:1–8), and stipulates the preparation of six of these as sanctuaries (miklat; in modern Hebrew, shelters) for unpremeditated murderers.

In the light of the forthcoming distribution of the land, the reading then concludes by recapitulating an incident narrated previously (Numbers 27:1 ff.).  It seems the five daughters of Tz'lafhad, of the tribe of M'nasheh, have sought parity with their male relatives in inheriting their deceased father's territory. God accedes to their request, with the additional proviso here that they must marry within their tribe in order to keep the allocation intact.

In tacit recognition of the daughters' legal triumph, the Torah takes the unusual step of prominently recording their names. On each of the two previous occasions they have been enumerated (Numbers 26:33 and 27:1), they are listed as Mahlah, Noah, Hoglah, Milkah, and Tirtsah. In our reading (36:11), however, the order varies: Mahlah, Tirtsah, Hoglah, Milkah, Noah. Is the variation significant?

Two medieval exegetes explain the discrepancy by reference to context. To Abraham ibn Ezra (1089–1164), the first two lists (along with a similar naming of them in Joshua 17:3) enumerate the women by order of their birth, with the eldest first, while the sequence in our reading, which specifically relates to their marriages, lists them by the order in which they were wed. Rashi, under the possible influence of the talmudic prescription to marry off older daughters before younger ones, argues that the sequence in Mas'ei is by order of age, while the one appearing elsewhere is dictated by the order of "their wisdom."

The modern scholar Nehama Leibowitz (1905–1997) joins her predecessors in finding meaning in the alteration of the sequence. But she offers a decidedly psychological take on the issue, and one that is especially sensitive to family dynamics:

The reader may think that the interpreter is burdening the change in sequence with a significance it really lacks. That is not the case. Perhaps we can endear the exegetical approach to the contemporary consciousness by citing a detail from the Shakespearean play Hamlet. The king, who murdered his brother, and the queen summon the two wicked courtiers, and induce them to spy on Hamlet, their erstwhile boon companion, and reveal his secrets. They conclude this request as follows (Act II, scene 2, lines 33–34):

KING: Thanks, Rosencrantz and gentle Guildenstern.

QUEEN: Thanks, Guildenstern and gentle Rosencrantz.

This informs us that they are regarded equally by both the king and queen; neither one is given preference lest they become jealous of one another, so that they may devote themselves wholeheartedly to the dastardly plot.

There is, of course, nothing in the least dastardly about our own plot, which ends with the daughters fulfilling all of God's prescriptions, marrying within the families of M'nasheh, and keeping their father's portion within the tribe. Sometimes, though, a nod to the bard can help prevent us from assuming that biblical exegesis is much ado about nothing.