Mattot: The Wrong Side of the River 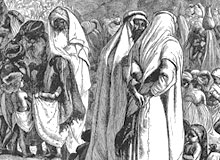 "The farmer and the cowman should be friends," advises the song, but they generally aren't.  This week's portion suggests this was the case even in ancient Israel.  Earlier in the book of Numbers we have seen challenges to the leadership of Moses, from Korah (chapter 16) and even from his own siblings, Miriam and Aaron (chapter 12).  Now, in chapter 32, a rift that goes right through the people is exposed.

The Israelites are camped on the steppes of Moab, on the east bank of the Jordan, waiting to swarm into the land of Canaan and take possession of it.  At just this crucial moment, two of the twelve tribes, Gad and Reuben, beg off.  They own large numbers of livestock, and it seems that the lands of Jazer and Gilead, east of the river, would be the best location to raise them.  They plead with Moses in plain Hebrew, "Don't make us cross the Jordan" (32:5).

The other tribes still have to cross, however, and they know that they will have a fight on their hands.  How can Gad and Reuben abandon them at such a moment?

For Moses, it is "déjà vu all over again."  In a tirade 10 verses long, he accuses them of a crime equal to that of the spies (chapters 13-14) who caused the Israelites to panic and refuse to cross into Canaan 40 years before.  This time, though, it is not fear that is making the Gadites and the Reubenites want to stay on the east side of the river, but a simple matter of economics: that is where they are likely to be able to raise their herds most prosperously.

Given that the issue at stake is economic and not theological, a compromise turns out to be relatively simple to reach.  The two tribes will quickly settle their women, children, and livestock on the east bank and then lead the rest of the Israelites across the river into battle.  If they do so, Moses promises, he will not object to their making their permanent homes east of the river.  And that is what eventually happened:  "The Reubenites, the Gadites, and half the tribe of Manasseh [who get in on the action toward the end of Numbers 32] left the Israelites at Shiloh, in the land of Canaan, and went back to the land of Gilead, their permanent holding, which they had been granted by Moses on the Lord's instructions" (Joshua 22:9).

It is not hard to understand why the Torah would want to tell this story.  As it is the land of Canaan, west of the Jordan, that was promised to Abraham, this episode explains why some of his descendants are living on the wrong side of the river.  But another aspect of the story is much harder to explain: namely, where did the Gadites and the Reubenites get their livestock?

As the Torah has presented the story up to this point, the Israelites are a single community.  They are camped tribe by tribe, to be sure, but all of them are equidistant from the Tabernacle, which is their center.  We have not a single indication of any commercial activity—or, indeed, of anything the Israelites do to occupy their time (with the possible exception of the man in Numbers 15:32 found gathering wood on the Sabbath).  How did the Gadites and the Reubenites manage to become so different, as a group, from the other tribes?

The answer would seem to be that getting ready to cross the Jordan was a crucial moment not just in the history of Israel, but also in the way the story is told.  Remember that the Israelites entered the wilderness by walking dryshod through the sea, and that they will leave it by walking dryshod across the Jordan.  Thirty-nine years have passed since the book of Numbers began, during which they have not had to toil for their food, but have been living on manna that fell out of the sky for them.

When the Israelites walk out of the bed of the Jordan, though, and set foot for the first time on the soil of Canaan, they will step back into history.  And ever since Numbers 22:1, the Israelites have been camped on the east bank, ready to take that step.  So the magical world of manna, Miriam's well, and a miraculous cloud that leads them through the desert is beginning to disintegrate, and the real world of competition and confrontation is beginning to show through the cracks.  In Joshua 22, which describes the upshot of this episode in Numbers 32, we find the Israelites on the west bank accusing those on the east bank of treachery and preparing to make war on them.  We have come a long way from the consecration of the Tabernacle in Numbers 7, when the chieftains of Reuben and Gad brought exactly the same offerings as did the other ten chieftains.

But there is no going back.  From this moment on, the Jews will struggle as much to make peace among themselves as they will to make peace with their enemies.