Pinhas: "Simeon and Levi are Brothers" 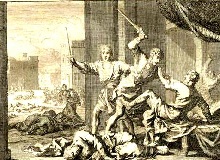 This week's reading places principal emphasis on the order of the sacrifices, delineating the entire year's required offerings along with their accompanying libations and meal-offerings. It begins, however, where last week's reading left off: with the aftermath of the Midianites' seduction of the Israelites. It is partially repetitive and partially complementary, and that is what helps make it so interesting.

Why was this information "withheld" from last week's reading, and why is it revealed now? To put the query in the terms of a rabbinic idiom: "Why are the words of Torah poor in one place and rich in another?"

The names of Pinhas's victims may have been omitted from last week's portion for a simple reason: at that point, they were unimportant. The mere fact that any Israelite was capable of such public effrontery was sufficient to ignite God's anger and cause the plague. Only after the sinners have been executed, the plague arrested, and Pinhas rewarded for his zealotry does the Torah mention—and then almost offhandedly—the identity of the ringleaders. It now redounds all the more to Pinhas's credit that he was prepared to act even against a prince and princess.

Zimri's behavior, moreover, may not have been isolated; a significant portion of the tribe of Simeon appears to have been seduced. While an earlier census (Numbers 3:13) reports the population of the tribe at almost 60,000, a census conducted later in this week's reading (26:14) gives a figure of about 22,000. How to account for the substantial discrepancy? The Midrash Tanhuma resolves it by attributing to Simeon the full tally of the mass plague.

Might there be still more to the tribal identity of Zimri and his co-conspirators? After all, their eponymous ancestor was also involved in an illicit sexual encounter and its consequences. When Dinah, the daughter of Jacob, was raped in Sh'khem, her brothers avenged her honor by slaying all the city's male inhabitants (Genesis 34). Curiously, the initiative in that vigilante act was taken by two brothers in particular: Simeon—ancestor of Zimri—and Levi—ancestor of Pinhas (vs. 25).

While the brothers acted in unison, it appears that they were divided in intent. Rabbi Naftali Tsvi Yehudah Berlin (1816-1893, known by his acronym as the N'tsiv) comments that the word "two" in the verse "the two sons of Jacob, Simeon and Levi, [each] took his sword and came upon the city in stealth" (Genesis 34: 25) appears superfluous but is not:

It comes to teach us that while they united in a great anger to destroy an entire city and united in placing themselves in great jeopardy, they remained, nevertheless, two; they differed one from another in what motivated that fury. One [Simeon] came with an ordinary intent to guard zealously the reputation of his family—a demonstrable cause of rage. The other [Levi] came with fervor for the sake of the Lord, with no ulterior motive. His was a divine passion.

Hundreds of years later, a similar distinction still holds. Now, Simeon's descendants have grotesquely inverted their ancestor's rage into an act of mass sexual transgression, in the process bringing everlasting opprobrium to their tribal name. By contrast, Levi's descendant, faithfully perpetuating his ancestor's intent, will earn himself "an eternal covenant of peace" (Numbers 25:12).