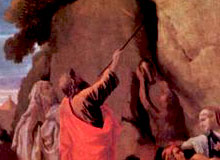 This week's reading contains an apparently straightforward episode that is in fact one of the most mysterious in the Bible.  When the Israelites find themselves without water, they become quarrelsome.  Moses is commanded by God to "Take the rod and assemble the congregation, you and your brother Aaron; then, before their eyes, speak to the rock and let it produce its water" (Numbers 20:8).

At first Moses seems to obey, taking the rod and gathering the people.  But he addresses the assembly in anger, and instead of speaking to the rock, "Moses lifted his hand and struck the rock with his rod twice."

The real puzzle is in what happens next.  Although water flows forth from the rock, Moses and Aaron have apparently done something gravely wrong, and God admonishes them:  "Because you did not believe in Me enough to sanctify Me before the eyes of the Israelites, you shall therefore not bring this assembly into the land that I have given them" (Numbers 20:12).  There will be no reconsideration of this decree.  Aaron will be dead by the end of the chapter, and Moses' death looms ahead.

The deaths of Moses and Aaron will prevent them from participating in the culmination of their great mission: bringing the Israelites out from Egyptian slavery and back to their ancestral homeland. Centuries of commentators have failed to come up with a convincing explanation of what Moses and Aaron did that was so profoundly inimical to God's plan. Or, rather, they have come up with so many convincing explanations that none of them is obviously the explanation.

Moses' mistake is clear enough.  God told him to speak to the rock, but instead he struck it.  What exactly was it about this that brought such a tremendous punishment down on him and his brother?  After all, the first time God had him get water from a rock for the Israelites (Exodus 17), that is exactly what God had told him to do.  What was so different about this occasion?

Rashbam, the 12th-century scholar and grandson of Rashi, gives an explanation that is as good as any.  Here, a commentator summarizes Rashbam's thought:

Moses misunderstood God's command to pick up the rod; he did not think he could get water out of the rock by speaking.  He assumed that he had to strike it, as he had done at Rephidim.  He thought that God's instruction to "order" the rock to yield water was just an expression for striking it.  The Holy One accommodated Himself to Moses' action to the extent that water did come forth.  But Moses was punished for his action nonetheless—for the Holy One holds the righteous to a very precise standard of behavior.

Rashbam's point is not merely that someone on the level of Moses is not allowed to make even so slight a mistake.  It is something much more significant:  Moses did not understand what God wanted.  He had lost his ability to prophesy and it was therefore pointless for him to be the one who would take the Israelites across the river.

But perhaps what God told Moses was not the reason for the decree at all—just an excuse for it.  Something like this happens in the book of Job, where God blasts four chapters of magnificent poetry at Job instead of explaining, calmly and reasonably, what we readers know from chapters 1-2 of the book:  Job is not being punished; he is merely the subject (or rather the object) of a heavenly wager.

Moses, unlike Job, has earned what happens to him.  It is a punishment, yes, but not for striking the rock.  In fact, it is a punishment Moses himself asked for, when he failed, at the very outset of his mission, to seize his role as liberator of the Israelites with the proper enthusiasm.  It has taken a while to get around to it, but God is doing no more than fulfilling the request that Moses himself made when they first met, at the beginning of the book of Exodus:  "Please, Lord, send anyone you like on this mission"—anyone but me.

God has finally granted Moses' request. The moral?  Be careful what you wish for.