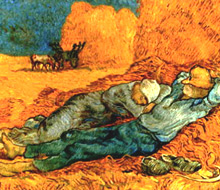 The construction and inauguration of the mishkan (tabernacle) that we have been following for the past month comes to an end, along with the Book of Exodus, in this week's double portion.  Curiously, it is enveloped by references and allusions to Shabbat at its outset and at its close.

The first portion, Vayakhel, begins right away with a seemingly gratuitous repetition of the laws of Shabbat:

Six days shall work (m'lakhah) be done, but the seventh day shall be sacred, a Sabbath of Sabbaths (shabbat shabbaton) to the Lord; whosoever does work on that day shall be put to death. Do not kindle a fire in all your habitations on the Sabbath day. (Exodus 35:2–3)

According to the midrash (cited by Rashi), the intrusion of the Shabbat laws upon the enterprise (m'lakhah!) of the mishkan (tabernacle) means to inform us that the construction, however important, does not defer Shabbat. More subtly, perhaps, it analogizes the mishkan with Shabbat whereupon the Sages deduced that the 39 categories of labor prohibited on Shabbat are precisely those that were integral to the building of the mishkan.

On the closing end, the finale of Pekudei, the second portion, bears a striking similarity to the completion of an earlier endeavor: the creation of the world, in general, and the sanctification of Shabbat, in particular.

The point, apparently, is to cast the mishkan as a microcosm, a world in miniature. Just as the world embodies a divine design that was handed over to man "to preserve it" (Genesis 2:15), so was the divine design of the mishkan delegated to the priests "to preserve" (Leviticus 22:9). And significantly, according to Exodus 31:16, so was Shabbat.

The Shabbat laws, however, are not the only intrusion on the narrative sequence of the mishkan. Whereas the detailed plans of the mishkan and its furnishings occupy the portions of T'rumah and T'tzaveh, and whereas their implementation takes up our current portions, the intervening portion of Ki Tissa is devoted primarily to the episode of the golden calf. Moreover, whereas the ark is the first item to be described in the instructional section, it is the final item to be constructed in the section on implementation.

Can all these anomalous literary features be explained jointly?

It strikes me that the unifying theme here is symbols and their susceptibility to abuse.  The golden calf demonstrated that the people—with the notable exception of the Levites—had substituted a symbol for that being symbolized.  That, I believe, is why Moses inverted the sequence of his instructions concerning the mishkan when it came to their implementation: He fashioned the ark last, in the privacy of the inner sanctum, lest the sight of the cherubim cause the same confusion as the golden calf.  It also explains why Aaron and the Levites were the only Israelites who were permitted to glimpse the ark and cherubim, since they alone were impervious to false symbols.

Where does Shabbat enter this picture?  It, too, is a symbol.  Even before the revelation at Sinai, Shabbat had been introduced to the Jewish people as the day on which they would not find manna in the field (Exodus 16:25).  Initially, the Jews ought to have been able to make their own a fortiori deduction: If Shabbat took precedence even over the life-sustaining labor of collecting food, it surely ought to take precedence over the labors of the mishkan.  After they fell prey to the misplaced symbolism of the golden calf, however, God reminded them of the Shabbat, emphasizing its value as "an eternal sign between Me and the children of Israel" (31:17).  The Jews were now to have the controlled symbolic environment of the mishkan, but not at the expense of the original, authentic, "sign": Shabbat.