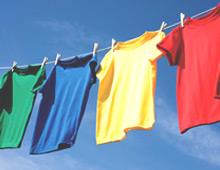 This week's portion opens with the manufacture of the priestly vestments. When their manufacture is complete, God instructs Moses to dress Aaron and his sons in the vestments, anoint them, "fill their hands" and sanctify them to serve (28:41). Rashi (1040–1105) explains:

Every instance of "filling the hands" signifies initiation. Whenever someone enters [a new situation] in order to become entrenched in it from that day onwards, he is "filled."  In la'az [Old French], whenever someone receives an appointment, the sovereign places a leather glove—called a gant—in his hand, by means of which he certifies him.  This bestowal [of the glove] is called revetir, and that is "filling the hands."

Both of the French glosses that Rashi employs here have English equivalents.  The first, gant, is cognate with the English gauntlet, which also means a glove; the kindred expressions, "to throw down/take up the gauntlet," which mean to issue and accept a challenge, likewise evoke the bestowal and acceptance of authority. The second gloss, revetir, is cognate with the English revest, an obsolete form of invest, meaning, literally, to clothe and, figuratively, to endow. "Filling the hands," then, is a form of investiture and this is why we opened with a reference to the priestly garments as vestments.

The exact description and specifications of one of the vestments, the ephod, eludes even Rashi, who relies, once again, on his French milieu:

I have not heard nor have I found a description of its configuration. My heart tells me, however, that it is belted about him at his back, its width the width of man's back, in the fashion of an apron that is called [in Old French] pourceint, which the noblewomen wear when they go horseback riding.

In other words, the ephod, according to Rashi, is a riding "habit." Capitalizing on the fact that a word designating feminine riding apparel ("habit") is related to a word for a characteristic or usual behavior ("habit"), we pose the age old question: Does the man makes the clothes, or do the clothes make the man? The Torah's answer seems to be that, in the case of the vestments, the clothes made the priest.

Clothing is endowed in the Bible with special significance, as God dresses Adam and Eve with leather tunics of His own manufacture.  In his commentary on Genesis, Benno Jacob (Germany; 1862–1945) expands upon this point as follows:

Clothing is not merely protection against the cold or an adornment; it is the visible sign of a primal and necessary distinction for human society and, from the point of man's moral sensitivity, his advantage over the animal.  A man's rank and dignity are displayed by his apparel . . . . and the most dignified station at which a mortal man can arrive is that of the high priest as he enters the holy of holies on Yom ha-Kippurim. He is dressed, then, in white—the symbol of purity and light—in order to resemble the "uniformed man" [i.e., an angel, cf. Ezekiel 9:3 and Daniel 10:5].

The Talmud stipulates proper apparel as a necessary prerequisite for proper service: "Whenever the [priests] wear their vestments they are in service; if they do not wear their vestments they are not in service."  Service performed with improper dress is not only invalid, but renders the performer a zar, an alien to the priesthood, whose trespass on the performance of the divine service is punishable by death.

An incident in my own experience drove this point home. I had stopped at the office of the registrar of the Bodleian Library at Oxford University to obtain a card of admission. Arriving at closing time, I encountered the official on his way out and persuaded him to return and issue the card. He did, but not before removing his overcoat and jacket and donning his official robe. "If they do not wear their vestments, they are not in service."

In our own service of God, we too need to be "invested." Hasidim regularly gird about their waists a gartel, a plain black woven belt, as a sign of their preparedness to pray. Many non-Hasidim will don hats for that same purpose. Those of us who wear neither would do well to pause before performing any ritual in order to assume a singularity of purpose—if not haberdashery.