Mishpatim: Love, Freedom, and the Law 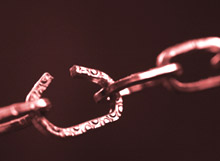 And now, a little bit of law. Nestled between the two mega-memes of the Revelation at Sinai and the construction of the Tabernacle, we find a weekly reading that starts with "these are the statutes (mishpatim) that you will place before them." It goes on to provide us with the basics of the Torah's civil and criminal laws. Murder, theft, animals, slaves, and the integrity of the courts all get addressed, echoing many of the central themes of the Ten Commandments, which we heard last week.

It seems so innocuous, this legalistic interlude.

But then, as happens so often in the Torah, something goes awry. Our list of laws begins not as you might expect, with killing or property (or property that kills, like the goring ox). Instead, the first statute relates to a case that is bizarre and obscure but which, we suspect, has implications for all the laws in the Torah.

So . . . you bought that Hebrew slave, right? Six years have passed and according to the rules, it's time to let him go. But there's trouble. During his stay with you, he's fallen in love with your Hebrew maidservant, and they went and had Hebrew servant-babies. As you're attempting to escort him from your property, he begins crying out. "I love my master! I love my wife and my children! I will not go out free!" (Exodus 21:5)

Trouble, yes. But the Torah offers a quick answer: The local rabbis order you to take him to the gate of your home, take your handy awl and punch a hole in the man's ear. Thus you mark him, not unlike the cows in your barn or a ticket in the hands of a bus driver, as your slave forever. Next case!

Oy. Where to begin? Of the million questions that the story conjures up, the most obvious one, I think, is this: Does it describe, in the Torah's own eyes, a positive or a negative turn of events?

For so many years, I've read this as a moral tale about the importance of valuing our own freedom. Law as lesson: One should never want to be a slave, because we were slaves in Egypt. If a man is willing to sacrifice his freedom, he deserves to be a slave forever. In like manner, the Israelites in the desert who longed for the fleshpots of Egypt ended up squandering their chance of freedom and dying in the desert. Lesson: You give up your autonomy, you have given up on your humanity as well, and are a slave forever.

Maybe it's having kids that has soured me on this reading.

The problem with the freedom-über-alles reading is this: What about love? Are we to look at the slave's commitment to his wife and children, at the howl of a man forced to choose between his freedom and his own kin, as a frivolous thing, a distraction, a wrong? Is freedom the only thing that makes us human?

In other words, our original question may now be rephrased as follows: Does the slave fail to see the larger context, tossing aside his humanity for something as trivial as love? Or is his affirmation of love the only context worth seeing?

Is the awl in the ear a punishment for choosing slavery over freedom? Or is it just an unpleasant consequence of insisting on love, a choice the slave was right to make?

And whom, we must further ask, is the law trying to protect? The owner, from future claims from freed slaves bent on reclaiming their children? The slave, from being forced to abandon his family for an abstract freedom? The wife and kids, from losing their husband and father to imposed freedom? Or is it just meant to create a disincentive for slaves to avoid starting families before they're free?

The text doesn't say a word.

Now, add to the mess the fact that this is the case that begins the Torah's whole interpretation of law. It is almost as if, by introducing all of law with this case, the Torah is trying to show us just how inadequate law is in circumscribing the totality of life. By overriding the basic command to release the slave in the face of his passion, the Torah destroys and establishes law in the same breath. In that perverse instant, all of law stands on the edge of a knife. Can any rule really resolve such a situation?

Law is about real human beings. Without man, law is but logic; with man, it is often close to farce. Yet man without law is far worse than that. This, in many ways, is the deepest conundrum surrounding the institution of law to begin with. The infinite, confounding, boundless spirit of man confronts the chilly shackles of principle. The former makes religion meaningful, the latter makes society possible; one gives our lives content, the other gives them form.