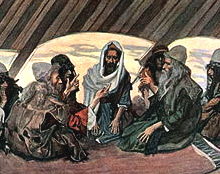 This week's portion describes the giving of the Ten Commandments, and the Torah spares no expense to bring us special effects worthy of the event: smoke and fire, thunder and lightning, and an earthquake, all accompanied by the blare of a shofar growing louder and louder.  The Israelites are about to experience God's self-revelation, in a most dramatic fashion.  But this week also has something for those who like their dramatic moments more subtle.  I am referring to the interaction between Aaron, Moses, and Moses' father-in-law, Jethro.

The portion begins with the arrival of Jethro, his daughter Zipporah, Moses' wife, and her two sons.  Zipporah had earlier been "sent home" (as the JPS translations of Exodus 18:2 has it), perhaps because Moses had thought better of bringing the family along when the whole point of his arrival was to get the Jews out of Egypt.  Now that the danger and difficulty are passed, Jethro has brought the family back to Moses, "because he heard all that God had done for Moses and His people Israel, that the Lord had brought them out of Egypt" (v. 1).  The coast is clear and the family can be reunited.  (The reunion may not have gone so well; this is the last time Zipporah's name will appear in the story.)

Jethro said, "Blessed be the Lord, who has rescued you from the power of Egypt and of Pharaoh, who has rescued the people from under Egyptian control.  Now I know that the Lord is greater than all the other gods!" . . . Jethro, Moses' father-in-law, took a burnt offering and other sacrifices to God, and Aaron and all the elders of Israel came to have a meal with Moses' father-in-law in the presence of God.

Aaron is soon to become the Israelite high priest, but he has not taken office yet; that will happen only in Leviticus 8.  Much sooner, in this very week's portion, the Lord proclaims that the Israelites themselves are to be "a kingdom of priests and a holy nation"—but that too is still yet to occur.  The only person on the scene with experience in offering sacrifices to God in the proper way is Jethro, who according to Exodus 18:1 is "the priest of Midian," and has been ever since we first met him in Exodus 2:16, when Moses first arrived in Midian, some sixty or so years ago.  What God has done calls for an act of worship, and Jethro steps in to perform one.

Next comes the famous scene of Moses tiring himself out by issuing judgments "from morning to evening" (v. 13).  Jethro tells him forthrightly, "This thing you are doing is no good" (v. 17).  He explains to Moses that he must stop micromanaging and instead set up a conflict-resolution system that will relieve him of the easier cases and ensure that only the most difficult ones will reach him.  According to v. 24, "Moses heeded his father-in-law and did everything he told him to do."  Moses thought he was acting like a leader, but it took another act of leadership on Jethro's part to make it possible for him to become one.

The message of both these incidents is clear:  Moses and Aaron, though they have brought the Israelites out of Egypt, do not yet have the skills necessary for leadership.  Moses has spent his adult life in charge of a flock of sheep, and is not up to the task of keeping the Israelites in line.  Aaron, as High Priest in waiting, has the more technocratic role; but, while as a firstborn son he has presumably been the senior religious functionary for his family, he too steps aside when Jethro takes charge.  It will be a while before Aaron feels comfortable in the priestly vestments.

And that is how the Israelites' first government was set up for them, and their first offerings to the Lord were made for them: by a non-Israelite.  Jethro knows which God deserves to be worshipped for freeing the slaves from Egypt, and he knows how to do it; he also knows that their freedom needs to be kept within bounds, and he knows how to arrange that too.

Having set things running, Jethro performs his final act of leadership—perhaps the hardest for a leader to do.  He might easily have retained his powerful role.  Moses and Aaron had put up no resistance to him; if anything, they were grateful for his being there to take charge.  But having set things on course, he yielded control and "went back to his own country" (v. 27).

Jethro has given Moses and Aaron the tools.  Now they must finish the job.