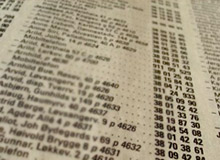 In last week's column, Moshe Sokolow pointed out that the name of the portion was Sh'mot, a word that itself means "names."  He took that as an opportunity to mention some of the more interesting Jewish surnames and their meanings.  I cannot resist adding my own favorite: Remba, an acronym taken from Proverbs 19:21, "Many are the schemes of the human mind."

But of course it is not merely last week's portion that is called Sh'mot—that is the name of the entire book.  So perhaps it is not remarkable that this week's portion, too, focuses on a Name, one with a capital N, the "Ineffable Name" or Tetragrammaton, the four-letter name "YHWH."  The word "God" (though we capitalize it) is not a name, but a job description, like "Pope" or "President."  YHWH, however, is understood to be not simply a title but God's name.

We are frequently reminded that Abraham and Sarah had their names changed from Abram and Sarai, and that Jacob too had his name changed, to Israel.  No one uses the names Abram and Sarai except to refer to Abraham and Sarah before their names were changed, but it would be more accurate to say not that Jacob's name was changed, but that he was given an additional name.  For although he is twice told, "Your name shall no longer be Jacob" (Genesis 32:29 and 35:10), the Bible continues to call him by that name.  Indeed, we still do so.

We face an opposite, but otherwise comparable, situation in this week's portion.  This one is a "not yet" rather than a "no longer," but (as in the case of Jacob) the Torah seems to be "just saying" something that does not jibe with what we read elsewhere.  What happened is this:

This, of course, does not match what we know from previous episodes.  In fact, God tells both Abraham (Genesis 15:7) and Jacob (Genesis 28:13), "I am YHWH."  The name must have been generally known long before the time of Moses, for it occurs almost 150 times in Genesis.  This is nothing to be surprised about; even Eve knew that name (see Genesis 4:1).

So how are we to understand what God is telling Moses here?  A traditional view, cited—and debunked—by Rashi (northern France, 1040–1105) is based on two factors in the story leading up to this pronouncement.  First, Moses explicitly asks God what His name is:  "When the Israelites ask me, ‘What is His name?' what shall I tell them?" (Exodus 3:13).  As we know from the story of Jacob wrestling with the angel, this kind of question is not regarded favorably.  And in Exodus 5:23, just before the conversation recorded at the beginning of this week's portion, Moses has complained that things have gotten worse, not better, for the Israelite slaves.

The midrash cited by Rashi, then, understands that God is not giving Moses new information here, but instead rebuking him: "Listen, I'm YHWH, all right?  The patriarchs never challenged Me about that, so where do you come off doing so?"  But as Rashi goes on to point out, (1) the text does not say that the patriarchs did not ask God's name, but that they did not know it; (2) they did in fact know it, as we've said; and (3) such a rebuke does not make sense in the context, where God is announcing that the covenant made with the patriarchs to redeem their descendants from Egypt and give the land of Canaan to them will now be fulfilled.  In fact, says Rashi, YHWH is not just a name, but the name that God uses to indicate that His promises are reliable.

This is the path generally taken by traditional exegesis.  The different names for God in different places in the Bible are emphasizing particular qualities that are relevant at that moment in the story.  Scholarship that is not constrained by religious belief takes a different approach:  The Torah is woven of textual strands that were not originally coherent.  In one, the name YHWH was not in fact revealed until now; in another, it had long been known.  Philosophically, it seems correct to argue even more strongly:  The unique being outside of time and space that God is presumed to be would have no name at all, except in the earthly realm, and even then strictly for the sake of communication with humanity.

If that is so, is there even any point in discussing what is really going on here when God "reveals" the name YHWH to Moses?  Rashi has the answer for this as well.  He points out that the midrash does not make sense when we look at the text as a whole—"this midrash is not consistent with the biblical text"—but he includes it not merely to rebut it, but for its own sake:

Let the midrash be told anyway.  "Behold, My word is like fire—declares the Lord—and like a hammer that shatters rock!" (Jeremiah 23:29).  Interpreting a verse is like a hammer striking rock: it creates many sparks.

The revelation from amidst a fire atop Mount Sinai, of which we will read a few weeks from now, was a one-time event.  Rashi's advice?  Never miss an opportunity to recreate some of the sparks from that fire.