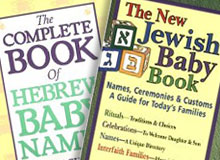 "These are the names of the children of Israel": Despite having designated them by name during their lifetimes, [Scripture] enumerates them again, posthumously, to indicate how beloved they were. (Rashi 1:1)

While the traditional English title of Sh'mot is "Exodus," the word translates literally as "names." This presents us with the opportunity to explore the significance the Bible attaches to names, in general, and the meaning of one individual name, in particular.

The narrative of creation makes it abundantly clear that names are more than just handy ways of identifying things. Indeed, Adam's mastery over all other creatures was made manifest in his naming them:

And out of the ground God formed every beast of the field, and every fowl of the air; and brought them unto the man to see what he would call them; and whatsoever the man would call every living creature, that was to be the name thereof (Genesis 2:19).

Changing names is similarly charged with considerable significance and is regarded as equivalent to a change of fortune. Abram and Sarai may have been fated to remain childless, but Abraham and Sarah were destined to be parents. Ya'akov (Jacob), was forced to bear the ignominy of duplicity (‘-k-v), but Yisra'el (Israel) enjoyed the reputation of candor and sincerity (y-sh-r).

Referring to groups of people by their individual names is regarded by rabbinic tradition as a sign of endearment. Instead of just saying that Jacob's family numbered seventy souls on their arrival in Egypt, the Torah records their every name (Genesis 46:8 ff), and rather than just reiterate here that Joseph's family numbered twelve siblings, the Torah again reports all their names—evoking the citation from Rashi with which we began.

When Jews began to bear "civil" names, they devised matching sets of biblical and colloquial names to preserve their correspondences. In Eastern Europe, Jews were named Dov Baer, Zvi Hirsch, and Binyamin Wolf, while Italian Jews used names like Judah-Leone (lion), and Mordechai was called Angelo because a rabbinic legend identified him with the prophet Malachi. Jews in Arab lands named Judah were called Assad (lion) and those named Joshua or Isaiah were called Faraj (redemption). In Provence, the Jews of Montpellier called themselves Min Ha-Har (mountaineers), those of Argentiers were Ibn Kaspi (silver), and those of Lunel were Yarhi (moonies?).

Kohanim (priests) in particular exerted considerable ingenuity in denominating their ancestral lineage, yielding such variants as: Cohen, Katz (an acronym for kohen tzedek), Kahn, Kagan, and Kahane. A Sephardi tradition bestowed the surname Azulay on kohanim based on the initial letters of the verse that severely restricts priestly marriages (Leviticus 21:7), and the surname Mazeh stands for Mizera (descendants of) Aharon Ha-Kohen. Italian Jews, having recognized the priestly lineage of the Rapa family of Porto (near Mantua), reserved the name Rapaport for kohanim.

The constancy of Jewish names also plays a prominent role in a midrashic account of the Exodus, which attributes the redemption from Egypt to the fact that the Israelites, while in bondage, did not change their names or their language. Ironically, the best known Jew of that era, Moses, likely bore an Egyptian name.

While the Torah labors valiantly to emphasize the Hebraic origin of Moshe ("from the water I have drawn him"—meshitihu; 2:10), commentators from Josephus to Ibn Ezra have regarded that derivation as mere folk etymology and have argued, instead, for its derivation from Egyptian, in which ms means child or son. Just as the pharaohs Ra-mses and Tuth-mose bore names that designated them as children of the gods Ra and Tuth, respectively, the princess who retrieved the infant's basket named him Moses (sort of like "kiddo"), either implying that his parentage was unknown, or signifying that he was a child of the Nile, whence he was drawn.

Preserving ancestral names is enshrined in Jewish culture, with the forenames of parents and grandparents often recurring throughout several generations of a single family. With the onset of modernity and the combined challenge and stimulus of open societies, Hirsch might become Harry, Jacob-Jack, Isaac-Ike, and even Moses might become Morris, but traditional names, like the proverbial pintele Yid (Jewish spark), somehow endure. My late father once ascertained the Jewish ancestry of a Russian immigrant named Boris by asking what his babushka (grandmother) called him. "Borukh Ber," he said, wistfully.