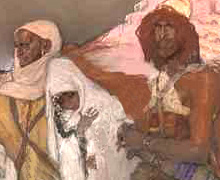 The time of patriarchs was reaching its end. Jacob was dying, and alongside his dictation of burial arrangements, he also gave final words to his twelve sons, words in which he would tell them "what will befall you in the end of days." We usually read them as his final "blessings." But in the case of two sons, Simeon and Levi, they are assuredly curses.

Simeon and Levi are brothers; instruments of cruelty are their swords. Let my soul not come into their council; to their assembly let my honor not be united. For in their anger they slew a man, and in their willfulness they lamed an ox. Cursed be their anger, for it was fierce; and their wrath, for it was cruel. I will divide them in Jacob, and scatter them in Israel. (49:1–4)

Jacob knew full well the power of a father's deathbed will: He had caused unspeakable pain to be inflicted on his brother Esau through words much milder than these. But the actions of Simeon and Levi, who deceived and slaughtered the men of Shechem in retaliation for the rape of their sister Dina, were too much for Jacob to suffer.

Does the Bible endorse Jacob's view? Not necessarily. While Simeon's offspring ultimately descend into historical irrelevance, the Levites become the guardians of the Temple, priests to God, teachers of the people.

This is not a small problem in the text. The stories of the twelve brothers are meant to tell us something about the fate of the tribes they sired. If Jacob's curse on Levi doesn't come true, it raises the possibility that he deeply misunderstood at least one of his own sons.

To unravel the mess, we need to reread the saga of Simeon and Levi, as individuals and tribes, as a five-act play. It's a story of extremism, zealotry, and violence—and the difficulty in telling right from wrong in the high-stakes game of the love of God.

Act 1: Shechem. After the king of Shechem helps himself to Jacob's only daughter Dina, Simeon and Levi conspire to vanquish the whole city. They pretend to cut a deal in which the Shechemites first circumcise themselves, and will then be allowed to marry Israelite women. They agree, and when they are at the height of their physical weakness, the brothers kill them all. Jacob is livid, on the grounds that all the other peoples will descend upon him and his family. The brothers respond, "Should he deal with our sister as with a harlot?" And here things get strange.

The brothers' retort is left hanging in the air, at the very least suggesting they have fought to a draw. Later on, it becomes clear that Jacob's fears were unfounded: "The terror of God was upon the cities that were round about them, and they did not pursue after the sons of Jacob." We are left with a sense that Jacob's judgment is not the same as that of the text itself.

Act 2: The Curse. In this week's reading, Jacob curses Simeon and Levi, calling them "brothers"—the emphasis suggesting that he saw them as identical to each other, motivated principally by anger, deserving the same fate.

Act 3: The Test. Generations later, in the wake of the Golden Calf in the book of Exodus, Moses famously calls out "Whoever is with the Lord, come with me!" Only the Levites come to Moses' side, and they slay two thousand Israelites with the sword as retribution and purification of the camp. Simeon's tribe, for all its presumptive bloodlust, is nowhere to be found. And so, at a crucial moment, we discover that while Levi and Simeon may both have indulged in violence, their deeper nature was in fact different.  To put it bluntly, Levites are zealots for the Lord, while Simeonites are thugs.

The Levites are rewarded with the priesthood. It's a double-edged reward: Their violent zealotry, so repugnant to Jacob, is channeled away from physical violence and towards extreme ritual, where any mistake can mean death, but where the consequences are purely religious. They are to be left out of military affairs and without land of their own. Their violence neutralized, their zealotry can be expressed in a more useful manner.

Act 4: The Last Battle. To make the point clear, in Numbers we find the head of the tribe of Simeon, Zimri ben Salu, publicly bedding the daughter of the king of Midian—an act not just of licentiousness but, in context, of idolatry as well. With Moses and Aaron standing by, powerless to stop it, Aaron's grandson Pinhas, heir to the leadership of the Levite priests, hurls his javelin through Zimri and his concubine, killing them both. This is the final act of Levite violence, and it is aimed at none other than the chief of Simeon. Zealotry takes out thuggery, Levi defeats Simeon once and for all, thereby distinguishing himself and disproving Jacob's claim that they are "brothers."

Act 5: The Inheritance. In the book of Joshua, upon entry into the Promised Land, the Levites receive just the minimal land around urban centers and are teachers of God's word and servants in the Temple. In this sense only, Jacob's curse comes true. Simeon, on the other hand, is lost to history, his descendants unable to find a coherent piece of territory and utterly subsumed into Judah.

The message of all this? Our human world is a complex one, with some people built for the nasty business of diplomacy, nuance, and gracious maneuvering; while others are preternaturally primed for ideological purity, simplicity of principle, and extremity of action. Jacob was clearly the former, and had no room in his world for Levi. Somehow, however, biblical religion did make room for the Levite, not just by giving a place of honor and productive purpose to his otherwise uncontrolled zealotry—but also in requiring that the rest of us take care not only of the poor and orphaned, but also the "Levite in our gates"—as well as their spiritual heirs, the zealots, mystics, absolutists and other difficult individuals who, in spite of everything, are entrusted to our care.