This week, Jewish Ideas Daily commemorates the forty-fifth anniversary of the Six-Day War with a day-by-day synopsis, for which we are indebted to Michael Oren's comprehensive Six Days of War.  Below, the sixth of a seven-part series.  Read parts I, II, III, IV, and V.

Once Dayan decided against a limited attack in the Golan and opted instead to take the entire Heights, Israel's air force pounded the Syrians. The Syrians had supposed the Israelis to be tired and intimidated by their incessant shelling; unprepared for the ferocity of the barrage, their morale suffered, and some officers and soldiers deserted. But the bulk of Syria's forces remained in place, ready to give fight, while hoping for UN intervention.

Traffic jams delayed Israeli reinforcements from other fronts, retarding an assault from the south; the attack proceeded in the center, but involved exhausted Israeli tank crews climbing the rocky terrain of steep (2000 ft) hills in broad daylight, totally exposed to Syrian fire from the enemy's most formidable forces. Upon hearing of the plan, some commanders described it as "suicide.'' But they proceeded unafraid. 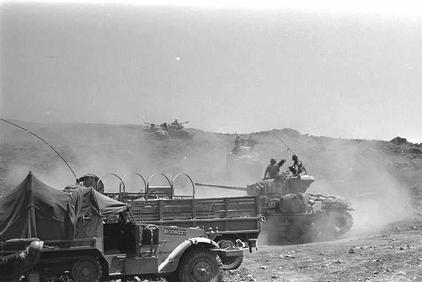 Israeli tanks climbing a steep hill in the Golan Heights

With tank maneuverability reduced by the terrain, the Israelis found themselves at the mercy of dug-in Syrian tanks. Pressing on, the fighting was intense and confused as tanks fired at extremely close range.  Maps were lost, bulldozers were destroyed as they tried to clear away barbed wire, and the threat of landmines was everywhere. The Israelis also underestimated the ability of the Syrian bunkers to withstand massive bombing.

"The Syrians fought well and bloodied us,'' recalled one Israeli commander, but after a whole afternoon in battle, the IDF had made important advances. The successes were not without cost, however, in men and arms. The Syrians did manage to stop the IDF's movement, but they too had taken a beating, and were left fearful and chaotic.

Even without reinforcements, the IDF in the south moved ahead with an attack reminiscent of the bloody battle for Ammunition Hill in Jerusalem: fighting at close quarters, often hand-to-hand. As troops advanced, the first soldiers to reach the Syrian perimeter laid down on the barbed wire, enabling the rest of the squad to vault over it. Reaching the trenches, the fighting remained intense: "Whenever a helmet popped up, we couldn't tell if it was one of ours or not,'' related an Israeli battalion commander. The seven-hour struggle left many dead.

Israeli forces managed to accomplish most objectives well ahead of schedule, but were still only eight miles into Syrian territory. The conquest of the entire Golan, Rabin estimated, would take another two days of fighting at least. Beyond its front lines, Syria's forces remained intact, though some were recalled to defend Damascus. Defense Minister Assad swore in a speech to continue to battle "Zionist imperialist aggression,'' Arab ambassadors were summoned to determine what military assistance their countries could provide, and a special appeal was made to Egypt, Syria's ally by treaty. 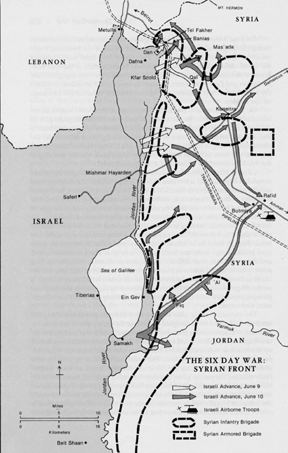 But Egypt was reeling from Israel's coup de grace in the Sinai and could offer no help.  The Israelis took the Suez Canal, but—whether out of overconfidence or fatigue—did not occupy its northern terminus, thus neglecting a port critical to the massive Soviet rearmament of Egypt. No new arms, however, could compensate for the impression of thousands of Egyptian soldiers limping in humiliation back to Cairo.  Nasser later remarked that the IDF could have also entered the capital.

The Egyptians rioted against Nasser, who took the blame.  When it seemed like the people might demand a firing squad, he tendered his resignation in a live broadcast:

But then, in a bizarre turnaround, the people flocked to the streets in a display of public mourning, demanding that he stay in power. Westerners were incredulous about this course of events, but whether impromptu or planned, the demonstrations of support convinced Nasser to accept the resignations of his military commanders while remaining in office himself.

Meanwhile, the Israeli agenda at the UN was to stall, so that Israeli forces could create conditions on the ground for a real and stable ceasefire.  But while demands to end the fighting waned in New York, they waxed in Washington, where the State Department was truly fearful of Soviet intervention.

Back in Israel, Prime Minister Eshkol supported Dayan's turnaround and granted approval to continue the campaign through the night.  Dayan was skeptical as to how much farther the IDF could advance, but with the arrival of the delayed reinforcements, the commanders on the ground were preparing to move. The Syrians braced themselves for the Israeli onslaught. "Pave the roads with the skulls of Jews,'' Assad ordered. "Strike them without mercy.'' The fight, Damascus held, was not over.