The Six-Day War: Day One

This week, Jewish Ideas Daily commemorates the forty-fifth anniversary of the Six-Day War with a day-by-day synopsis, for which we are indebted to Michael Oren's comprehensive Six Days of War.  Below, the second of a seven-part series.  Read part I here.

As the sun rose on June 5th, 1967, squadrons of Egypt's MiG fighter jets took to the skies for their morning patrols. Fearing that an Israeli attack would begin at dawn, their aim was to be ready to meet any Israeli planes. With an air force twice the size of Israel's, consisting of over 400 modern combat aircraft (supplied by the USSR), they were more than a match for their adversary in the air. But finding everything quiet that morning, they returned to base for breakfast. At bases from the Sinai down to Luxor, the most powerful air force in the region stood inert on the tarmac, without even hangars for protection.

Military historian Bill McQuade on "standing to" at dawn

Unbeknownst to the Egyptians, the Israelis were wise to their daily routine. They had gathered intelligence not only on every Egyptian jet, but on every pilot, down to the sound of his voice. This intelligence was the basis of "Operation Focus": the plan, revealed to only a handful of ministers, to attack the Egyptian air force at its most vulnerable. Still, no one expected what was to follow.

At 7:10 a.m., the Israeli Air Force set off for what looked like routine patrols. But although the planes appeared to be Mirage jets, they were in fact no more than a mirage: the real fighter jets, flying below radar detection, were about to begin the assault on Egypt's airfields. Some flew out into the Mediterranean, to come back around to hit targets from Al-Mansura in the north, to Cairo, and still further to Al-Minya in the south. Others flew south over the Negev before turning east to hit targets across the Sinai peninsula. Still others continued on over the Red Sea, on their way to Luxor.

Just after 7:30 a.m., the first bombs were dropped. By 8 a.m., Egypt had lost 204 planes. Before the end of the morning, Egypt had lost 286 combat aircraft, together with 13 bases, 23 radar stations—and a third of its pilots. Even the head of the IAF, Motti Hod, refused to believe the initial reports. It was only after debriefing his pilots that he reported back to Yitzhak Rabin: "The Egyptian air force has ceased to exist."

If Hod and Rabin were surprised by Focus—and they were, almost to the point of stupefaction—the Egyptians remained blissfully unaware of it. In the wake of the attack, the Egyptian government released the following communiqué: "With an aerial strike against Cairo and across the UAR, Israel began its attack today at 9 a.m. Our planes scrambled and held off the attack." Cue wild celebrations on the streets of Cairo. But it wasn't only the Egyptian populace that was shielded from the truth. Abdel Hakim Amer, the Egyptian Chief of Staff, had seen the reality with his own eyes: his plane had just taken off when the assault began, and as it flew from airbase to burning airbase, Amer witnessed the scale of the devastation, barely making it to Cairo International Airport before he was shot out of the sky himself. Yet he never revealed this to Nasser, who persisted in believing his own government's propaganda.

Meanwhile, the ground assault on the Sinai desert (codenamed "Red Sheet") had begun—though for the time being, the Jordanian front remained quiet. For Eshkol, Dayan, and Rabin, all-out war with Jordan was to be avoided as far as possible. Artillery, ammunition, and men had been diverted to the Egyptian front. As tensions flared along the border in Jerusalem, and Jordan's King Hussein weighed his options, he received a telegram from Israel, telling him that Israel would not attack unless Jordan opened hostilities. But Hussein didn't trust the Israelis. So when Nasser called him confirming the reports of massive Israeli casualties, and claiming that the planes flying over Israel which had showed up on Jordanian radar were not Israeli jets returning to base but Egyptian MiGs raiding Israeli airfields, Hussein resolved to join the fray.

Suddenly West Jerusalem came under sustained artillery bombardment. Hadassah hospital was hit; twenty civilians were killed, and over a thousand injured. Dayan retaliated by bombing the Jordanian airfields, destroying her twenty Hawker Hunter jets as they refueled after bombing raids on Kfar Saba and Netanya. Yet Israel's retaliation remained muted, and when the UN attempted to negotiate a ceasefire, she accepted. Jordanian forces responded by seizing UN headquarters at Government House Ridge. Still, it was only when Jordanian radio announced the capture of Mount Scopus that Dayan began to worry: not because the Jordanians had already taken it, but because if that was their next target and they took it successfully, West Jerusalem would be easy prey. Meanwhile, Iraqi forces were massing in the West Bank, threatening to strike the coastal corridor and cut Israel in half.

Asher Dreizin and his reservists were charged with retaking Government House Ridge from the supposedly invincible Arab Legion. Dreizin started with eight WWII Sherman tanks, five of which broke down en route. Yet with more guns and men, Dreizin broke through. The Legionnaires fled, but Dreizin's men gave chase. For four more hours they fought, at times hand-to-hand. By 6:30, Dreizin, with only ten men left, had beaten the Legion back to Bethlehem.

Meanwhile, Dayan orchestrated an assault on the cannonry at Jenin and mooted capturing the Latrun corridor. Rabin objected: Why give Hussein a pretext for further attacks? But Dayan had already given the orders to the troops.

For the watching world, as the dust settled on the first day's fighting, the spoils were even. With only Arab propaganda to guide them, the London Times reported that the Syrians had destroyed the Haifa oil refinery and that the Iraqis had bombed Tel Aviv. Though at least one cartoonist was less convinced: 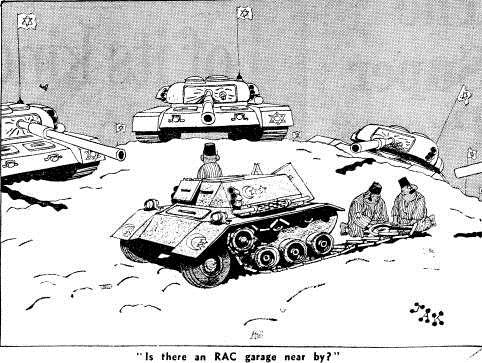 In reality, the dust hadn't even settled: at 10 p.m., under cover of night, Ariel Sharon was intensifying artillery fire on Egyptian defenses in the Sinai until they were under constant bombardment. Only a select few in the Israeli government knew the full extent of the damage wrought against the Arab forces. And though Eshkol preached caution, the prize of the Old City was coming into view.

"The tension in the Middle East over the Gulf of Aqaba blockade develops into full-scale war."
(Universal Studios Newsreel)

You can find this online at: http://www.jidaily.com/dayone